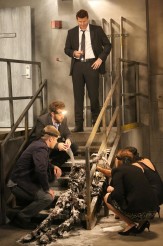 TV Review: BONES – Season 10 – “The Corpse at the Convention”

A great array of suspects and forensic techniques 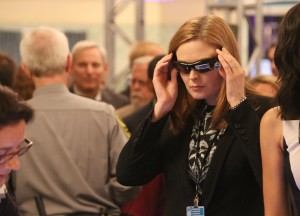 By now, BONES certainly knows all about fandom, but in “The Corpse at the Convention,” it bends this phenomenon to its own parameters. The results are funny and unexpected, with a great mixture of new forensic ideas and possible suspects, including the extremely annoyed Hodgins (TJ Thyne).

Brennan (Emily Deschanel) is designated as the keynote speaker at a conference for forensic scientists. Her lab family attends to support her. Everyone – even computer whiz/artist Angela (Michaela Conlin) – is deluged by fans, as well as inventors plugging their latest gizmos. This last turns out to be handy when a body is discovered, still on fire, on the premises. Unfortunately for Hodgins, the victim is Dr. Leona Saunders (Amy Davidson), an old nemesis who made a fortune when she stole one of Hodgins’ ideas back when they were both in college. Worse, Hodgins was seen arguing with Leona shortly before her body was found.

Making the situation more aggravating for Hodgins is that Aubrey (John Boyd) is comparatively new to being Booth’s (David Boreanaz) partner, so he has a tendency to treat Hodgins like a regular suspect.

On the plus side, a lot of the inventions pressed on our team by forensic inventors are helpful in solving the case. Indeed, one of the inventors turns out to be the culprit, angry that Saunders had slept with him for his idea, then stolen it and broken up with him.

In the B plot, Wendell Bray (Michael Grant Terry) is back in the lab, his cancer now in remission thanks to an experimental trial. He goes through a spiral of dismay, depression and fear when one of his trial mates abruptly falls ill again. Booth gives him a pep talk, citing an instance when he lost twelve Army brothers in one engagement. Wendell takes the message to heart and is able to function again.

Although on the nose, this scene works very well, as Booth’s points about loss, grief and survival are well-made and Boreanaz delivers them with real feeling.

As for the A story, the verbal dueling between Hodgins and Boyd, with Booth as reluctant referee, is handled deftly. The convention inventions are all intriguing and sound plausible and useful, and it’s a great moment when the murderer is thrilled that his device helped to solve a crime, even if it got him arrested.

The script is clever and adroit, even giving Brennan a Schroedinger’s cat joke that Booth doesn’t get, but of course goes over huge with her scientist audience. Nora Dunn shows up as Brennan’s literary nemesis Tess Brown, and the always skillful John Billingsley plays the convention chairman.

“The Corpse at the Convention” is BONES at its enjoyable best.