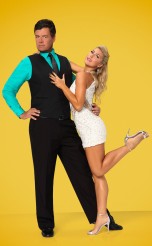 There was no other place for Michael Waltrip to go but home. After lasting an impressive eight weeks, the Nascar superstar, along with his partner Emma Slater, was voted off DANCING WITH THE STARS a week shy of the semi- finals. A dance off as to who would get three extra points may have hurt him in the DWTS dance race. The highest scoring couple of the night, Janal Parrish & Val Chmerkovskiy who earned a perfect 40, was immune to the dance off while the other six pairs competed against each other in either a Cha Cha Cha, a Rumba or a Jive. Tommy Chong & Peta Murgatroyd beat out Waltrip & Slater, while Alfonso Ribeiro & Witney Carson easily beat out Lea Thompson & Artem Chigvintsev. It ended in a tie when Sadie Robinson & Mark Ballas took on Bethany Mota & Derek Hough. Head judge Len Goodman had to make the final call with his vote, giving the edge to Mota & Hough. Six left…on to the semi-finals.

Michael Waltrip and his partner Emma Slater
Valiant effort. Inaba noted his improvement in his Foxtrot. Goodman said it was his best dance. Hough told him it was much better. Tonioli called it cute.
Scores: Inaba – 6, Goodman – 7, Tonioli – 7, Hough – 7,  Harland – 6

Bethany Mota and her partner Derek Hough
Intricate and complex. Inaba called her Salsa phenomenal. Goodman said it was sizzling. Hough saw her come out of her shell. Tonioli said she had versatility.
Scores: Inaba – 9, Goodman – 9, Tonioli – 10, Hough – 9, Harland – 9

Lea Thompson and her partner Artem Chigvintsev
Creative. Inaba said she gained her confidence back. Goodman said her Jazz was a little safe. Hough said she was underwhelmed. Tonioli said it needed to be more badass.
Scores: Inaba – 8, Goodman – 8, Tonioli – 8, Hough – 8,  Harland – 8

Tommy Chong and his partner Peta Murgatroyd
He did great. Inaba said he was a beat behind in his Paso Doble. Goodman called it tasty. Hough said he is a charmer. Tonioli said he admired him.
Scores: Inaba – 6, Goodman – 7, Tonioli – 6, Hough – 7, Harland – 7

Who went home: Michael Waltrip & Emma Slater
Who Has Legs To Take Home The Mirror Ball: It’s Ribeiro vs. Parrish