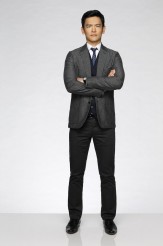 The actor also hints whether he'll return to SLEEPY HOLLOW 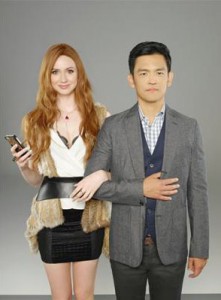 Actor John Cho has done quite a lot in his career, including playing Harold in the HAROLD AND KUMAR movies, taking on the mantle of Mr. Sulu for the STAR TREK reboot films and being a regular in four previous television series. However, ABC’s half-hour SELFIE, Tuesdays at 8 PM, is Cho’s first lead in a romantic comedy. He plays Henry, a version of MY FAIR LADY’s Henry Higgins, who is attempting to get social media-obsessed Eliza (Karen Gillan, of DOCTOR WHO) to let go of her electronics and engage with real people.

Cho, who was born in Korea, says at a Q&A panel that ABC holds for SELFIE and the Television Critics Association that he feels a certain kinship with the original Henry.

“I was just thinking recently about Henry’s background,” Cho explains, “and looking at MY FAIR LADY, he was a linguistics expert, and I was thinking how as an immigrant I kin of have that. I’m a bit of a linguistics expert, too. When you’re not born in this country, you tend to study how the natives talk, a little bit like Gatsby or something. I mean, it doesn’t matter when you look different, which is the lesson I learned later,” he notes with a laugh. “But you become an expert in how your neighbors and friends and schoolmates come off.”

After the panel, Cho makes time for a few extra questions.

ASSIGNMENT X: People in SELFIE have to-do lists. Have you ever done that?

JOHN CHO: I’ve tried. It’s not been particularly successful for me. I don’t know why. I change my mind and I get disappointed if they’re not happening, so I’ve become a little bit of a feel my way through it kind of a person.

AX: What do you get to do as Henry that you have not gotten to do before as an actor?

CHO: I’ll let you know what is completely unique, but in general, what’s unique for my career is being in a romantic situation, so it’s a pleasure to be in that world.

AX: Are you still recurring on Fox’s SLEEPY HOLLOW at all, or does SELFIE preclude it?

CHO: I think I could be on it a little bit, if that makes any sense. I don’t want to speak about my contract, because I don’t know if they want me back, but I think I could do one or two a year.