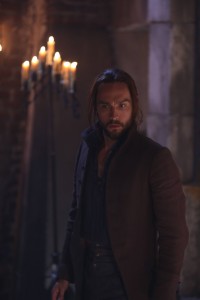 As its fans, known as “Sleepyheads,” will attest, there’s seldom a dull moment on Fox’s supernatural thriller SLEEPY HOLLOW. Now in its second season on Mondays at 9 PM, SLEEPY HOLLOW stars Tom Mison as Ichabod Crane, who had a quasi-death experience during the American Revolution and woke up in the present. He teams up with Sleepy Hollow police officer Abbie Mills (Nicole Beharie) to try to prevent the Apocalypse.

Ichabod and Abbie really have their hands full. In addition to dealing with the Headless Horseman, who is the Biblical Horseman if Death, they have to fight the Horseman of War, who introduced himself originally as psychic Henry Parish (John Noble). It turns out that Henry is the grown-up son of Ichabod and Katrina (Katia Winter), Ichabod’s wife who has been kidnapped by the Headless Horseman.

Mison, the English actor who plays Ichabod, is first available on the red carpet at a Paley Center panel for SLEEPY HOLLOW, then attends a party thrown by Fox for the Television Critics Association. At both events, he is cordial and radiates enthusiasm for all aspects of the series.

ASSIGNMENT X: Has SLEEPY HOLLOW’s success in any way matched your expectations of what it would be like?

TOM MISON: It’s surprised me as much as it’s surprised everyone else. I always believed that if people gave it a chance, it would pay off. But it was that first step, getting people to give it a shot. So I’m so grateful that people stuck with it.

AX: How are you enjoying the SLEEPY HOLLOW cult fandom?

MISON: Oh, it’s such a treat. It shows that people are enjoying the show and really invested in it, and that’s the greatest compliment that you can have as an actor. And also, I think the writers are enjoying it as well, because they know they can throw in something very small and people will pick up on it and explore it. It’s a joy.

AX: Do you make any suggestions about Ichabod to the writers?

MISON: I’m of the school of actors that tries to let writers do the writers’ job and let actors do the actors’ job. And so far – we’re very lucky with our writers, that they get Ichabod as much as I do. And when I first read the pilot, it’s one of those really lovely scripts that are few and far between, where you hear the voice and you see the mannerisms there on the page. We’re halfway through [making] Season 2 and that’s still the case.

AX: Did you do a lot of research on the Revolutionary War era?

MISON: A lot of it was in the scripts. The writers had done a lot of research. Obviously, there are moments that I wasn’t familiar with, not being an expert on American history. So I did lots of research into each of the characters that appeared from events that are described in the past. Ever since school, I’ve loved history, so a lot of the period in England I know about, and so I could bring some of that. And there are some excellent books – there was a really good book by Lisa Picard[?] – she wrote a series of books about Elizabethan London, Samuel Johnson’s London, which is when Ichabod’s from, and so I’d sifted through that. I owe a lot to Liza Picard and finding as many different antiquated swear words as I could and trying to fit old-school swear words in. But I was busted and they wouldn’t let me. Season 2, I’ll be swearing all over the place.

AX: If you were trapped in the Revolutionary War era, what would you miss most from the twenty-first century?

MISON: I love a bath, and I love just lying in a bath for hours with a whisky. Which I couldn’t do, so I’d die. I’d throw myself in a river, with some mead.

AX: What is your favorite aspect of playing Ichabod?

MISON: I think it’s finding a balance between the humor and the disaster that he’s in. It’s someone being far too proud to let anyone see that he’s terrified.

AX: What is your least favorite aspect?

AX: It’s now a plot point that Ichabod’s wardrobe is unlikely to change much. How do you feel about that?

MISON: I quite like it. There was a slight change of clothes – I thought it was a very clever idea to find a re-enactment camp and find a woman who sells eighteenth-century clothes. So I’m hoping that he’s going to go and visit her every time he wants a new blouse.

AX: How do you balance the comedy and the drama?

MISON: It’s largely thanks to the writers. They’ve done such an incredible job of walking that fine line. And it’s important to have those lighter moments. I don’t think it could be an incredibly earnest show, or it wouldn’t really work. I won’t lie – every time I get a script, I kind of look for those moments, because they’re just the fun ones to play, really.

AX: Did you know when John Noble was cast as Henry Parish that you were going to turn out to be his character’s dad?

MISON: Yes, I did. They said that, “A guy’s going to come in and you’re going to find out eventually that he’s your son.” I didn’t know about the War bit. I didn’t know he was the second Horseman. But yes, I knew from the beginning. And it was a very difficult secret to keep.

AX: How you are dealing with all of the complicated issues surrounding fatherhood here?

MISON: [sighs in character] Well, I mean, it would be tough enough finding out that you have a son you didn’t know about, never mind that he’s the Horseman of War. That’s certainly something to explore in the second season, is how do you fight a war against your son? On the one hand, he is the enemy, but on the other hand, he’s blood, so that’s Ichabod’s dilemma.

AX: And on the third hand, Ichabod didn’t know he was there in the first place, so it’s not like they have a pre-existing parent/child relationship.

AX: Do you think Ichabod has genuine love for his son, or is Ichabod feeling what he thinks he’s supposed to feel?

MISON: The former. Ichabod is too decent a man to spot away the fact that he has a son. And therein lies the problem in this war.

AX: Ichabod gets tossed around a fair amount. Have you had any particular challenge with wire work or stunts?

MISON: It’s always a struggle. I try to do as many of my own stunts as I can, and that’s always tricky. But then adding to that, it’s three in the morning and it’s ninety percent humidity, yeah.

AX: Your colleagues have said that a lot of people are getting bitten by insects on set …

MISON: I found five dead mosquitoes in my wig when I took it off one morning.

AX: Any other projects that you’re doing that we should know about?

MISON: I used my hiatus to prepare for this season and working in the next hiatus and then hopefully going on to a third season, so the break was more of a time-out. I had to turn down some very nice projects, but …

AX: When you and the SLEEPY HOLLOW cast and writers/producers did a panel earlier this year at the Paley Center, the Headless Horseman came on stage, passed a note to someone and when he turned to leave, his axe fell apart.

AX: Was that planned?

AX: That’s what made it great. It’s probably too early to ask about second season, but do you have a favorite episode or scene from first season?

MISON: From last season? My favorite episode is “Paul Revere’s Midnight Ride.” I think that really struck the perfect balance of the humor and keeping the danger that is the biggest challenge that the writers set themselves, is to keep it fun, always fun, but without losing the danger. And that one nailed it, I think.