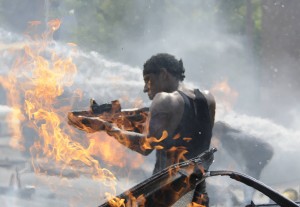 In Fox’s SLEEPY HOLLOW, now in its second season Mondays at 9 PM, all of the characters have problems. Ichabod (Tom Mison) wakes up after two hundred and fifty years to discover his wife Katrina (Katia Winter) is trapped in Purgatory, and that their beloved son Henry despises them both and is actually the Horseman of War (John Noble). Detective Abbie Mills (Nicole Beharie) learns that her childhood terrors were real and her old friend Andy (John Cho) is now a minion of the demon Moloch.

Arguably, the most beset figure of all is Orlando Jones’ Frank Irving. Formerly chief of police in the small town of Sleepy Hollow, Irving confessed to two murders in order to protect his young daughter Macie (Amandla Stenberg), who committed the deeds while possessed by a foul demon. Irving feels responsible for Macie’s possession in the first place, as Moloch was trying to get to him through his family; he already feels culpable for the fact that Macie is in a wheelchair. Irving has been transferred from prison to a mental hospital, after giving the true version of events, which sound clinically insane to the authorities. His new lawyer gets him released, but the counselor is none other than Henry, who pricked Irving’s finger, making it bleed, as they signed a contract. Uh-oh.

Unlike his character, Jones seems like he couldn’t be happier about all these events. The actor/writer, originally from Alabama, has plenty of fantasy/horror experience. In features, Jones has been in FROM DUSK TILL DAWN 3, BEDAZZLED, EVOLUTION, THE TIME MACHINE and CIRQUE DU FREAK, along with dramas including MAGNOLIA, DRUMLINE and THE CHICAGO EIGHT and comedies such as SOUR GRAPES, OFFICE SPACE and MISCONCEPTIONS. Jones was also a writer and performer on television’s MADtv and created and starred in THE ORLANDO JONES SHOW, THE ADVENTURES OF CHICO AND GUAPO and the Internet series TAINTED LOVE.

Jones also has a very positive reputation for interacting with SLEEPY HOLLOW fans, known as “Sleepyheads,” on Twitter, and he’s very cordial at both a Fox event for the Television Critics Association and the Paley Center for Media red carpet for a SLEEPY HOLLOW panel.

ASSIGNMENT X: When you started on SLEEPY HOLLOW, did you know about his back story with his daughter?

ORLANDO JONES: I knew that they wanted Irving to become part of the supernatural world. I don’t think at the time we had talked about the daughter explicitly, but I knew a little bit about – I think [executive producer/show runner] Mark [Goffman] mentioned that family was going to come into it. 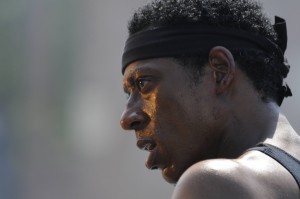 AX: You’re wearing a “Free Frank Irving” t-shirt on the Paley red carpet. Is this a statement about your plot arc for Season 2?

JONES: My t-shirt is me trying to advocate with Sleepyheads that we should break Frank Irving out of prison. It needs to happen, and since he’s a fictional character, I don’t mind trying to break this particular fake black dude out of prison.

AX: Did you know that Irving was going to turn out to be such a badass?

JONES: [laughs] I knew that based on his training and what we had discussed of his back story, that that needed to be very much a part of it, and it’s been fun to sort of build it in that way, almost unexpectedly.

AX: What kind of preparation did you do for that aspect of the character?

JONES: I was actually a deputy sheriff, so I’ve been down that road before. I became a licensed deputy sheriff when I was doing a movie [BEYOND A REASONABLE DOUBT, released in 2009] with Michael Douglas, and I think being tactile with guns and such is important for that type of role, but I think mostly when you’re carrying that type of power, to take somebody’s life when you’re armed, then that needs to be something that sort of resonates. That’s the most important part about the character.

AX: Has there been anything that’s been particularly physically challenging, like the scene where Irving faced off against the Horseman?

JONES: You know, I don’t know that I find those scenes physically challenging. I think they are mentally suffocating in some ways, because there’s so much going on the action and there’s no time to stick with it, so for me, I think the most difficult scene of the [first] season was the scene after that, where you’re finally realizing that everything you’ve been told was actually true, and what’s that look like? I thought if you look at PUNK’D and those hidden camera shows. You see people’s most real and most honest reactions, and they’re never big or over the top. So I just thought, “If I get this right, it’ll be something really small and subtle, but also like, ‘Holy shit, you guys have been telling me the truth the whole time.’” 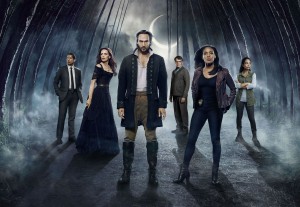 AX: Does the fact that Macie is in a wheelchair change anything in the way you play it? Do you play Irving as more protective of her than you would with a walking child?

JONES: I think so, but I think that’s less about her capability and more about his own guilt for not having been around when that happened. So I think there’s a certain feeling of hopelessness and helplessness when you as a father weren’t there for your child, and your child got hurt, and now you essentially are in a scenario where she’s in danger again and you might fail her as a parent for a second time. So I think the pressure he puts on himself is pretty extreme.

AX: When we met Irving, he was extremely restrained. Do you feel that he’s kind of gone from dry to wry?

JONES: In some ways. I’ve always thought of him as both, but the circumstances for him to be more wry are presenting themselves by virtue of the way things have unfolded. But I think that he was being wry earlier, but I don’t know that people had the information to perceive it that way.

AX: Do you have a favorite scene or sequence that you’ve gotten to do so far?

JONES: I think the sequences that are actually in [the episode “The Vessel”] are some of the most challenging, because you’re dealing with what happened to your daughter and her being possessed, and you’re not being able to take action the way you normally can. You can’t break and destroy things; you have to be a little bit more gentle when it’s occupying something you love so dearly. So I think those scenes, and also having to trust two people who you’ve only recently built a relationship with, with your family and him coming through – there’s just a lot going on emotionally in that episode. So those sequences are my favorite.

AX: And is there a place you’d like to see the character go next season?

JONES: I’m excited to see what Mark Hoffman and [series co-creators/executive producers] Alex [Kurtzman] and Bob [Orci] and [co-creator/executive producer/director] Len [Wiseman] are going to do with it. They’ve been so amazing with not only building just our characters, but even giving you the back story of the Headless Horseman in extreme detail. So I’m enjoying the ride very much from their perspective and me being able to just act, and that’s a lot of fun.

AX: Is there any other character you’d like to play on SLEEPY HOLLOW besides Frank Irving?

JONES: What other character would I like to play on the show? Moloch. That would be kind of fun, just to have the horns and the creepy walk. I would like that.

JONES:  TAINTED LOVE, my graphic novel, is out. It’s a lot of fun. You can actually watch it at taintedlovemovie.com, so it’s nice to do something that was digital and alive.

AX: Is there anything else you’d like to say about SLEEPY HOLLOW right now?

JONES: You know, I think SLEEPY HOLLOW speaks for itself. I don’t think it needs it.