Ties up a lot of plot issues, and yet … 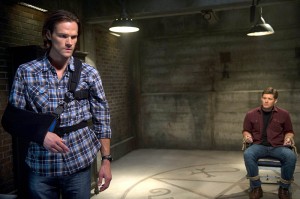 SUPERNATURAL entered its tenth season with a lot of crises – Dean (Jensen Ackles) turning demon, Castiel (Misha Collins) dying from lack of grace, Crowley (Mark A. Sheppard) suffering from unreciprocated friendly feelings towards Dean, etc. “Soul Survivor” ties up most of this. There are some moments of epic weirdness – Crowley saves Castiel?! – but this is SUPERNATURAL, after all, so we roll with it. There are some very sweet grace notes as well, but there’s also a feeling of repetition to the demon Dean/rescuer Sam (Jared Padalecki) battles, along with what seems like a huge omission on the demon’s part (more about this in a bit).

Sam now has Dean tied up at the Men of Letters headquarters. After getting a priest to bless a huge batch of blood, Sam tries the blood cure on Dean, who reacts by hurling a lot of abuse at his brother. This includes the fact that Sam persuaded Lester (David Nykl) to sell his soul so that Sam could capture and question the demon who showed up to do the deal. Dean then tells Sam that he cost Lester his life and his soul. Since one of the reasons Crowley wanted to cut ties with Dean was that Dean messed up the contract and Lester didn’t lose his soul, it’s not clear if this is Dean lying to make Sam feel worse or a continuity error. (We’ll go with Dean lying – it wouldn’t be the first time, demon or no.) Then Dean gets loose.

In Hell, it’s clear that Crowley’s heart isn’t in his kingly duties. One young-looking demon innocently offers to be Crowley’s new wingman; Crowley turns him to smoke and ash. Another demon is so offended by Crowley’s crappy rulership of Hell that he sets himself on fire. Clearly, there’s a problem.

Meanwhile, Castiel and Hannah (Erica Carroll) are heading to help Dean. It’s clear even to Castiel – not always the most astute observer in these matters – that Hannah is sweet on him. He cautions her that they don’t have time for distractions. Then they’re attacked in a convenience store by the renegade female angel whose mate they killed in “Black.” Castiel is badly stabbed. Crowley, of all entities, shows up, kills the irate angel, takes her grace and gives it to Castiel. Crowley feels it’s necessary for his own credibility for Dean to stop being a demon, or part demon, or whatever the hell he is right now. This may mean curing Dean or killing him – Crowley says he doesn’t care which. Since this is Episode Three of the season, it’s not spoilery to say that Dean doesn’t experience final death here, so we don’t find out if Crowley means it or not.

Dean is chasing Sam through the Men of Letters headquarters, but Castiel shows up in time to prevent lethal violence. A little more work and Dean is undemonized (and not dead, even though the demonization is what saved him at the end of Season 9). Apart from Dean’s chagrin, everyone is okay for now.

It’s not clear what the season will be going forward, since all of the immediate problems – Dean’s state of mind, Castiel’s health, Crowley’s interest in Dean – would seem to be cleared up by the end of “Soul Survivor.”

There’s a sequence of Sam, when he feels that curing Dean is hopeless, looking at old photos of the two of them in happier times. The pictures are so charming – they look as though they might be between-takes snaps of Padalecki and Ackles just having fun – that the effect is actually touching.

It’s a little unclear how Crowley thinks that simply re-humanizing Dean is going to improve his reputation. Killing Dean might do it, but he seems unwilling to try that (then again, trying to kill Winchesters is notoriously bad for a demon’s health). It’s understandable that Crowley wouldn’t want Dean roaming around as an unaligned demon, but it still feels like a wee bit of a stretch in order to bring about the unlikely and therefore unexpected scene of Crowley rescuing Cass.

Then there’s the matter of the things Demon Dean says to Sam. Granted, we’re not privy to all of the dialogue, but it seems that one potentially fruitful observation might have been that Sam wanted nothing to do with Dean for awhile when Dean was his normal, go-to-any-lengths-for-family brother; only now that Dean’s a demon is Sam back by his side. Want to reflect on that, Sammy? Evidently not, even though it seems worth discussing and might have a lot more impact than Sam getting Lester to try to sell his soul.

Ackles as the episode’s director does a good job with mood, not to mention selecting excellent photos, and he and his fellow actors all turn in solid performances.

“Soul Survivor” is a good episode, but even with all its arc conclusions, it’s not a standout.