Werewolves, reflections and, yep, that is a continuity error 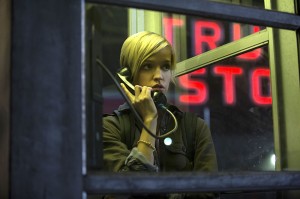 After everything that went down at the end of Season 9 and the start of Season 10, it’s understandable that SUPERNATURAL would want to give the Winchesters a little breathing room to settle down and talk to each other. Of course, there can’t be an entire episode of this, which is why “Paper Moon” also has werewolves in it.

Sam (Jared Padalecki) and Dean (Jensen Ackles) are chilling with beers by a lake shore, trying to convince themselves and each other that they really want some down time. However, when some strange killings occur in Durham, Washington State, Dean is desperate to do something and Sam can’t really say no. The trail leads to Kate (Brit Sheridan), the newly-made werewolf of 2012’s episode “Bitten.” Back then, the brothers had decided to give her the benefit of the doubt.

Turns out they were right to do so – the culprit is not Kate but her sister Tasha (Emily Tennant). When Tasha was severely injured in a car accident, Kate turned her in order to heal her, but Tasha lacks Kate’s self-control. Tasha in fact enjoys killing people and has turned a couple of local guys to be her pack. Sam and Dean take out the pack and when Tasha tries to recruit Kate to her lifestyle, Kate kills her sister. Kate then flees, and Sam and Dean don’t go after her.

Naturally, there’s some mulling over the whole kill-your-sibling-when-they-turn-into-a-monster business, since while Sam and Dean wanted Kate to do just that, they’ve never been able to do it when push came to shove. Dean thanks Sam for rescuing him. However, Dean also continues to wonder how Sam can be relatively unbothered that, in seeking Dean, he cost Lester his life and soul and –

Wait a minute. In the previous episode, when Dean brought this up, it was possible that the demon was just taunting Sam. Now it’s just Dean talking and – it’s not like this was last season, it was two episodes back – Dean was right there when Crowley had a fit that Dean killing Lester meant that Crowley didn’t get Lester’s soul. This wasn’t a bit of throwaway dialogue, this was the point at which Crowley realized that Dean was not going to be an asset. This was a major plot point. Why is Dean still insisting on blaming Sam for something that didn’t happen? Heck, he can blame Sam for creating a situation where Lester easily might have lost his soul, but this just doesn’t make sense.

On a somewhat related note, when Kate wants to remind the Winchesters that she is willing to take out bad werewolves herself, she cites the situation when she got turned. She killed the werewolf who turned her not because he was killing innocents, but because he’d just murdered her boyfriend in front of her and turned her with the expectation that she’d be his mate. We can hardly blame her, but by the same token, this doesn’t prove she’d kill a werewolf she doesn’t already hate.

The Sam/Dean conversations otherwise feel natural enough – a little tentative, a little embarrassing, neither one knowing exactly what to ask or say – but a little more narrative consistency doesn’t seem like it should be too much to ask.