Sarah Timberman digs into the differences between the seasons 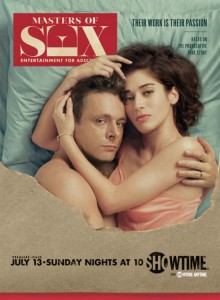 MASTERS OF SEX is now in its second season on Showtime, Sundays at 10, and a third-season renewal has been announced. On the red carpet at Paley Fest, and later, at a MASTERS set visit organized by Showtime for the Television Critics Association, Timberman talks about the fruits of the labor she and Ashford have lavished on their work.

ASSIGNMENT X: During Season 1, were you all confident there would be a Season 2, or were you worried?

SARAH TIMBERMAN: Showtime [executive] David [Nevins] and everyone at Showtime has been so supportive of the show that we had little doubt. They were very reassuring, very early on. We had a very clear idea of what Season 2 might look like, and they were on the same page with us, and they saw the same thing, and so it’s a great place to make a television show, because if something’s working, they really support you, so it wasn’t a big question about whether we’d do it again. I think virtually anywhere else, it might be, but Showtime was very clear in their intention, so it was wonderful for us. They’ve been supportive and encouraging, and we’re already thinking about where Season 3 would go. We actually kind of know. The nice thing about basing a show in real events is that you have a template in some way, so we have some idea of how Season 3 would end, so we’re already talking about it.

AX: Season 2 picked up right where Season 1 left off, with Bill on the doorstep telling Libby he can’t do without her. Was that always what you intended to do, or was that a decision made at some point in Season 1?

TIMBERMAN: We weren’t sure over the course of Season 1 exactly where we’d pick up in Season 2, but by the time we finished post on the final episode, it became so clear that we couldn’t do anything but return to that final moment left hanging at the end of the finale. Really, after we finished shooting the final episode, we realized we had nothing else to do but come back to [that moment]. If the door stoop left a question hanging, the first episode answers that question, but it doesn’t answer it in one way. There’s no simple answer to the question “What does this mean?” at the end of the final episode. It’s a very complicated answer.

AX: You jump three years ahead in the middle of Season 2. Is that because that was when the next big, interesting thing happened for Masters and Johnson, or was there any kind of production reason for that?

TIMBERMAN: We thought it would be exciting to make a jump in time that’s unexpected – you’ll be the judge of how well it worked – but we didn’t do it I think a more conventional way, which would have been at the beginning of the season. We made a jump along the way, and it’s unexpected, and part of it is born of necessity, because we have a lot of ground to cover in this series. If we’re fortunate enough to make six years of it, we’re covering decades, and so somewhere, we were going to make a jump in time, and we felt like it was too easy to do it at the beginning of the season, and we also felt like people would have felt robbed if they didn’t see the immediate aftermath of the [Season 1] finale. So we completely owed it to people who were engaged with the show to answer the questions that the finale raised and pick up in real time. So yes, we jumped forward in time, not because of milestones. What became interesting to us thematically is how over time, the more things change, the more they remain the same. We’ve been talking about the movie BOYHOOD a lot, because they obviously did it, and did it brilliantly in my view, and we’re looking thematically, I think, at some of the same questions in our show in the passage of time.

AX: With Beau Bridges’ character Barton Scully attempting to commit suicide and then having his wife Margaret, played by Allison Janney [who won an Emmy for her first-season performance] taking him off to Europe, did that have anything to do with Beau Bridges’ schedule, since he’s a regular on THE MILLERS, or was that simply a character moment?

TIMBERMAN: That story point – Scully’s suicide attempt – had nothing to do with his schedule and everything to do with the experience of the man that he was playing and the difficulty of being gay in 1950s America.

AX: Were you expecting the character to pop as much as she did?

TIMBERMAN: We adore Julianne as an actress, so we fully expected her to pop, because she’s remarkable and we consider ourselves very lucky to have [had] her as an ongoing presence in Season 2.

AX: Are you adding more fictional characters in Season 2, or is it easier to stick to the history?

TIMBERMAN: We are adding characters, but as with Season 1, many of them are inspired by true events and inspired loosely by real people. As an example, [the civil rights organization] CORE had a real presence in St. Louis in the early 1960s, and so as with Season 1, we’re looking for inspiration in real events in the lives of Masters and Johnson and in the life of St. Louis at the time, and so we’re constantly coming back to the tent poles of reality, but then embellishing.

AX: What is the division of responsibility between you and Michelle Ashford?

TIMBERMAN: Michelle is the writer/show runner, and so my hat is off to her. I’m the non-writing executive producer. We developed this together; it was a book that I had optioned and I have a long friendship and working relationship with Michelle, so we go back to the beginning of this project together, but I’m a producer and she’s a writer/producer, so different functions.

AX: So you have the same responsibilities, you just don’t go onto Final Draft on your computer?

TIMBERMAN: We share the responsibility, but I feel that television is a writer’s medium. We couldn’t possibly have the show that we have without Michelle’s inspired writing and I don’t think producing is nearly as hard, so I feel pretty lucky to be sitting in my seat, and sometimes I don’t envy hers, because this is a hard show to write, and she is one of the most brilliant writers I know, and I can’t imagine anybody else doing it. We spend time talking about story together, we talk about casting together, we spend time on set, both of us, but at the end of the day, if it’s not on the page, there is no show, and so I just have enormous regard for my partner.

AX: Are there any aspects of the show that have gotten easier to do, or tougher to do, as you proceed? Is the writers’ room running more swiftly?

TIMBERMAN: It is running much like it did last year. I’m speaking obviously as a non-writing producer, but I’ve spent a lot of time in the writers’ room with the writers and if you went into the room, you would see walls and walls of meticulously laid-out index cards and what’s hard to convey is the amount of time spent on each of those cards – that one index card with one line is the result of thirty-six hours of debate and discussion. There’s nothing that hasn’t been very, very, very comprehensively considered before it winds up in our show as far as story.

AX: Production-wise, is it easier to do the late Fifties, or the early Sixties?

TIMBERMAN: Production-wise, it is delightful to do both the late Fifties and the early Sixties. An utterly brilliant costume designer was having a field day with the Fifties and is now having a field day with the Sixties. I mean, we’re excited about all of it, we enjoy both periods. Michelle and I are both history buffs. We studied a lot in school and loved historical stories and there’s as much rich character [in history as in the present].

AX: Are other historical events factoring in?

TIMBERMAN: Many things that are external come into play. It’s our view that as Masters and Johnson become prominent figures on the stage of history, there’s a great opportunity to bring historical movements into our show. And so the show will open up and open up and open up as time goes on. I’m sure it’s no surprise to you that we get into the civil rights movement.

TIMBERMAN: [In Season 1, when Libby was] in Miami, telling a story that’s entirely untrue about her personal circumstances, that she’s widowed, and we loved seeing the subversive strain in that character, because she’s such a good girl and such a perfectionist and such an upstanding citizen that we love the opportunity in this season to see Libby go a little bit off the reservation. I don’t want to be too specific in how she does, but she does.

AX: Libby also had a very intriguing, and kind of disturbing, relationship with her first child’s nanny, played by Keke Palmer …

TIMBERMAN: Well, what it really becomes about is – I mean, what Libby’s looking for in a relationship with her nanny transcends a business relationship. She’s alienated from her husband and she’s looking for a best friend and it’s a strange place to look for one, in a girl who is years younger than she is and from a different cultural background, and we were really interested in the uneasiness of that, and how she might project a lot of her own ideas and beliefs onto this girl, and how that might blow up, which it will do. She’s missing a co-parent, and she’s looking to invent one in this girl, and it’s misguided and we love giving Libby opportunities to do something misguided, because she’s so upstanding.

AX: How do you feel about viewers’ reactions to MASTERS OF SEX?

TIMBERMAN: Well, I think what’s gratifying to us is, people see their own lives in our show, despite the fifty years since the events that we’re depicting. I think the subject matter is very relevant. So we love the fact that people can take something from the show and that it has a relevance to the people watching it and living it today, and intimacy is tough and sex is complicated and romantic connection is elusive and everybody knows that, so I think our show deals with things that are fairly timeless.

TIMBERMAN: We’re just thrilled to be making it and feel very fortunate that we’re at the tail end of our second season and people seem to be engaged with it.

Warren Beatty discusses his 1981 film REDS at the 2011 TCM CLASSIC FIL...
Exclusive Interview: Adam Horowitz chats about ONCE UPON A TIME
Exclusive Photos: Disney's ALICE THROUGH THE LOOKING GLASS premiere
THE KIDS ARE ALRIGHT: Michael Cudlitz on his new series and THE WALKIN...