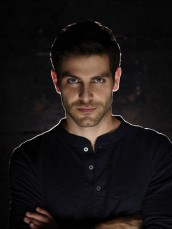 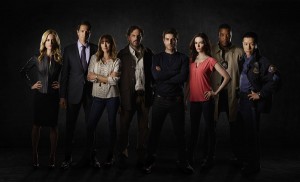 NBC’s GRIMM begins its fourth season Friday, October 24, at 9 PM, with just about all of the characters in a state of crisis.

Portland, Oregon police detective Nick Burkhardt (David Giuntoli) has lost his Grimm powers. Young Trubel (Jacqueline Toboni) now knows that she’s a Grimm, but she’s also wanted by the police. Nick’s police captain, Sean Renard (Sasha Roiz), has been shot multiple times and may not survive. Renard’s Hexenbeist ex-lover, the witch Adalind (Claire Coffee), is frantically searching for their super-powered baby daughter and who knows what she’ll do if/when she finds out that Renard gave the infant to Nick’s Grimm mother Kelly (Mary Elizabeth Mastrantonio) for the safety of all concerned. Renard’s cousin Prince Viktor (Alexis Denisof) is still searching for the baby for his own dark purposes. Werewolf-esque Blutbad Monroe (Silas Weir Mitchell) and fox-like Fuchsbau Rosalee (Bree Turner) had all hell break loose at their wedding. Nick’s girlfriend is still reeling from the revelation that Adalind assumed Juliette’s form to trick Nick into having sex with her.

GRIMM co-creator/executive producer/show runner David Greenwalt is at the Television Critics Association press tour for NBC’s show runner panel. When it ends, he takes some time to tell us where GRIMM’s ferociously-paced plot may be headed next.

ASSIGNMENT X: At the end of last season, you had novice Grimm Trubel arrive, and then had Nick lose his powers. Can you talk about whether you decided you wanted to add another Grimm so you could still have Grimm action while Nick was coping with being normal again, of if you decided that Nick should lose his powers so that you could add another Grimm, or if those were two separate developments?

DAVID GREENWALT: They were separate developments, because we thought it would be really exciting for the show to have a character who didn’t know she was a Grimm. So she would think she was mad, and in fact she’s been in institutions because of it. And then it occurred to us, well, what if Nick loses his powers. That would be a good thing, too. [She] could be his eyes and ears.

We talked about, is there another character to add to the ensemble? And we talked a little about what that character might be and what “they” [i.e., undetermined male or female], and we started thinking “she,” and we were like, “What would it be like if you were a Grimm and you didn’t know it? You’d think you’re insane. And yet you have this fighting ability and there are monsters and you’re a loner, so we thought it would be a great character to bring in. And I guess in a way we might have known – I’m not sure exactly when we knew he was going to lose his powers, but she certainly folds into that nicely. But things are not nearly as planned as they might appear to be.

GREENWALT: You know the fairytale of that casting? My partner, [fellow GRIMM co-creator/exec producer show runner] Jim Kouf, met her in Michigan while we were looking to cast this part. We looked at a lot of terrific actresses, but this young woman just seemed like she was the character. And we flew her out here and got her out here and got her reading and got the director, Bert [Norberto Barba], our main producer/director, to work with her and he really pushed her around a lot, and what you see is what you get with her. She’s fabulous. But it’s a real little fairytale, her coming out of nowhere.

AX: Are you totally shifting the paradigm with the characters, or …?

GREENWALT: It’s about identity, loss of identity and what it means to be someone who can see beneath the veil and then to lose that power. Is that something you should have back or shouldn’t have back? It’s Nick’s big decision of, if he has the chance to make that decision, of what would I do? Maybe I could have a normal life again. But once you’ve eaten that apple, there’s no going back.

AX: We’ve seen that Juliette is not thrilled about Nick’s Grimm nature. Is Nick going to have a dilemma as far as, maybe he can keep Juliette if he stays normal and maybe he’ll lose her if he returns to being a Grimm?

GREENWALT: Well, he’s going to have a big dilemma, but it’s, oh, much worse than that. Way worse than that. It’s kind of every woman’s nightmare. But that’s all I can say about it right now.

AX: If Nick becomes a Grimm again, might this dilemma have something to do with Adalind’s ability to make herself look like Juliette?

GREENWALT: Maybe something in that field somewhere.

AX: Are Monroe and Rosalee at least actually married? The wedding ended in such havoc …

GREENWALT: They’re married for real. They’re a real couple, but the honeymoon – we’re going to have to do something about that honeymoon that they miss. It’s going to be provided by friends of theirs, rather than going away to a beach somewhere.

AX: Will we be seeing Dee Wallace and Chris Mulkey again as Monroe’s Blutbad parents?

GREENWALT: I don’t know. Of course, we love them both. Dee and I worked way back when on a movie called SECRET ADMIRER that Jim and I did way back when, and he’s worked with Chris before, so it depends on what the needs are for Monroe’s character. If something very serious should happen to Monroe, they might need them to come back again, so I really don’t know about that.

AX: Did you bring C. Thomas Howell onto GRIMM because of having worked with him on SECRET ADMIRER?

GREENWALT: Well, a little bit, a little bit. Because we’ve been fans for a long time, and we loved him on SOUTHLAND. But then we cut his head off, so nobody is sacrosanct.

AX: What is happening with the badly wounded Captain Renard?

GREENWALT: Well, he did see the white light, so stay tuned. You’ll just have to stay tuned on that one, because he’s very seriously hurt, and he needs more than material medical can maybe give him.

AX: Season 3 felt like it really started snowballing, growing faster and more intricate as it added story arc elements. Is Season 4 going to continue in that way?

GREENWALT: Well, we certainly hope so, because we like that alacrity of stuff building and moving. We were very fond of that. The network, rightly so, said, “Have Adalind have that baby. We’re tired of waiting.” And it led to more and more events, because we then had to make up more and more events to happen. And every year, it’s like, “What’s the big thing that’s going to happen?” Having great actors, as the characters get deeper and more interesting and more surprising, then some of this stuff sort of bubbles up and comes to you – you’re not just making stuff out of whole cloth.

AX: How do you manage seasonal pacing? Do you feel like you have to add big plot events at certain specific intervals?

GREENWALT: I’m not sure if I’m answering your question, but what came to mind is, there’s a hole in the ship and we’re all bailing furiously. And at the same time, we’re discovering through the characters what the story is, and that’s both a little daunting and very exciting. So we have an idea of where we’re going. It’s sort of an organic thing, I suppose.

AX: Is Sergeant Wu, played by Reggie Lee, ever going to find out about the world of Grimms and Wesen creatures?

AX: Last season, the reason Wu thought he was crazy is that he encountered a creature out of Filipino mythology known as an aswang. Was there any consternation in the writers’ room of, “This creature is seriously called an aswang? Can we call it something else?”

GREENWALT: [laughs] A-swong. Of course. Sometimes we call each other an aswang. It works out.

AX: Can you preview any of the Wesen that we’re going to see this year?

GREENWALT: Well, there’s one I can’t preview, so what’s the one I can preview? Oh, yes. Did you see the movie RAGING BULL? Well, we’re going to have a fighter who is literally a raging bull.

AX: Are we going to see Adalind and Renard’s baby Diana again?

GREENWALT: We certainly hope so. We certainly hope to see Nick’s mom again, too, and maybe do something like we did last year, where she comes in a little later in the season. We don’t know that for a fact yet, but I think that baby is real important and we want to know where it is, what’s going on, what’s happening with that baby.

AX: Does Season 4 pick up where Season 3 ended?

GREENWALT: Literally, like one minute later. Literally, they’re in that car, driving away. We do that a lot on the show now, because it seems that you almost have to do that now.

AX: You actually shoot in Portland, Oregon. Will we be seeing any new Portland locations this year?

GREENWALT: Of course there will be bridges, we love the bridges, and there will be forests and the trailer now is in the woods now. What else? We just get such great locations there. That whole place is just a great canvas, that whole city and just the surrounding environs, we just love it.

AX: Anything you’d like to say about GRIMM right now?