doctor who review series 8 Mummy on the Orient Express

TV Review: DOCTOR WHO – Series 8 – “Mummy on the Orient Express”

Murder and Mayhem aboard a train in space! 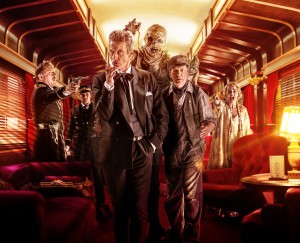 David Bamber as Captain Quell, Christopher Dane as McKean, Peter Capaldi as The Doctor, Frank Skinner as Perkins and Daisy Beaumont as Maisie in DOCTOR WHO - Series 8 - "Mummy on the Orient Express" | ©2014 BBC/BBC Worldwide/Adrian Rogers

“Mummy on the Orient Express” is yet again an excellent episode of the 12th Doctor’s (Peter Capaldi) new tenure on DOCTOR WHO. Following the events of the meltdown at the end of “Kill the Moon” it appears that the time has come for The Doctor and Clara (Jenna Coleman) to go their separate ways. So one last trip to somewhere nice is in order. That somewhere nice, and oh yes exotic, happens to be the Orient Express. In space. So it’s a trip to a space ship that looks like a relatively faithful recreation of the original train from Earth’s past. The passengers and staff are all costumed to look like they are also in the past, so aside from the fact that all of the windows look out onto space; it’s a trip back in time for all on board.

Of course there is a mystery at the heart of the episode, and this time around it’s a mummy known as the Foretold. It is a creature of legend and once you see it, you are doomed to die within sixty-six seconds. So as usual The Doctor and Clara end up smack in the middle of the adventure trying to stop this seemingly supernatural creature and also trying to save the lives of the remaining passengers.

There’s a few twists and turns along the way thanks to the A.I. controlling the train, known simply as Gus (voiced by John Sessions), and it is revealed that The Doctor once more knowingly put Clara in danger because he had been invited to a trip on the Orient Express many times before this and finally relented to his urges to find out why he had been lured there.

Strained is a word I would use to describe the dynamic between Clara and The Doctor this whole episode. There is a terseness there that hasn’t been around before, and it’s somewhat painful to watch their friendship degrade to constant “resting bitch face” from Clara, and The Doctor wriggling to and fro trying to avoid ticking her off on their “last hurrah.” Yes, once again we are dealing with the gruff and egotistical new Doctor, but there’s also plenty of times in this episode where we get to see him perform selfless acts to save others. In fact the resolution of the Foretold is really kind of touching and bittersweet.

Episodes like this of DOCTOR WHO are some of my favorites, when they cleverly blend period with Science Fiction. The costumes (except for Clara’s dress from Leluxe, I mean if DOWNTON ABBEY can have rooms full of amazing period 20’s dresses, DOCTOR WHO can’t spring for 1?) are well done and look appropriate for the amazing train sets that look like they could be used for a period production of an Agatha Christie murder mystery. Then when things shift towards the more fantastical elements of Sci-Fi, it just really resonates with me. This episode had a lot of the look and feel of VOYAGE OF THE DAMNED and I really do love seeing period costumes and sets in space settings.

Capaldi once again is turning in one fantastic moment after another, and there is a BRILLIANT scene, where he delivers a two way conversation with himself; and channels Tom Baker’s 4th Doctor effortlessly. It is amazing to see that split second of another version of The Doctor returning to speak through the new face, and it kind of takes your breath away and then makes you ink all over the floor with the rest of fandom. He also throws out “Are you my mummy?” which is a reference to the 9th Doctor episodes “The Empty Child” and “The Doctor Dances”. It’s so nice when things tie together for continuity.

Through the course of life and death, Clara decides to stay with our favorite Timelord, and after a brief phone call to my least favorite love interest Danny Pink (Sam Anderson) she and The Doctor fire up the TARDIS for points unknown.

And can we just talk about the closest civilized planet that The Doctor drops off the folks from the Orient Express on? Is that New New York? Or are my eyes deceiving me? Sure looks like it.

Next week looks nice and gruesome with another dimension intruding on ours and merging people with walls and floors and the like. Really enjoying this more adult WHO this series. It definitely is keeping me watching and waiting week to week!

Exclusive Interview: KIDS IN THE HALL member Dave Foley gets his Chris...
TV Review: MARVEL’S AGENTS OF SHIELD – Season 1 – “The Well”
A MOST VIOLENT YEAR Highlights this week in Blu-ray, DVD and VOD Relea...
Movie Review: THE ACCOUNTANT