One of the creepiest episodes in years! 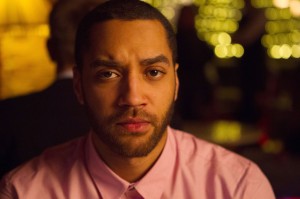 Steven Moffat is a master of the DOCTOR WHO scare episode. He has a unique ability to create new foes for The Doctor that make your hackles go up, and make you want to hide behind the couch the same way you did when you were a kid watching the classic WHO serial “The Brain of Morbius.”

First he gave us the Weeping Angels in “Blink”. Then we had to contend with the Vashta Nerada in “Silence in the Library” and “Forest of the Dead”.  He introduced the uber-creepy Silence with the Sixth Series Eleventh Doctor stories, and now we have whatever the critter is in “Listen.”

This might arguably be the MOST terrifying monster the DOCTOR WHO universe has ever had, and we never see what it looks like, and we never get to know if it even really is a monster. Of course, that’s part of the brilliant storytelling of this episode.

“Listen” is basically about the monster under the bed, and the question as to whether or not we are ever alone.  The episode starts with The Doctor (Peter Capaldi) postulating by himself (after some mediation on top of the TARDIS).

“Why do we talk out loud when we know we’re alone?” asks The Doctor. “Conjecture: because we know we’re not. Evolution perfects survival skills. There are perfect hunters. There is perfect defense. Question: why is there no such thing as perfect hiding? Answer: how would you know? Logically, if evolution were to perfect a creature whose primary skill were to hide from view, how could you know it existed? It could be with us every second and we would never know. How would you detect it? Even sense it? Except in those moments when for no clear reason, you choose to speak aloud. What would such a creature want? What would it do? Well? What would you do!?”

Creepy set up. Especially when we see the single word LISTEN written on his chalkboard in response.

Clara (Jenna Coleman) gets drug into the mix after her disastrous first date with Danny Pink (Samuel Anderson), and once she’s plugged into the TARDIS’ telepathic circuits the story really revolves around her (once again).  The Doctor and Clara end up in the past encountering a young Danny and the monster under his bed, with a red blanket clad menace creating more than one shiver for the viewer. Then they travel to the end of time (again?) and encounter someone who we are led to believe is Clara’s great-grandson Orson (also played by Sam Anderson).

This episode is perfect in the fact that the monsters are all in your head. You never see them, and it makes them that much more terrifying. In fact, it is left ambiguous at the end as to whether the monsters were ever really there in the first place.

Capaldi once again is brilliant, at times quite manic and others completely serious and disturbing in his intensity.  Coleman is her usual likeable self, and she carries her portion of the story quite nicely. Anderson gets his largest amount of screen time portraying two different characters, and I’m warming to Danny Pink a bit.

A couple of reviews ago I asked, “Does romance have a place in DOCTOR WHO?” It bothers me that the writers felt the need to introduce a love interest for Clara now that The Doctor and she aren’t flirting any longer. At his point it seems that Clara’s time with The Doctor is indeed coming to an end (especially if Orson really is her descendant). So I guess that means Jenna Coleman is leaving the series as rumors suggest?

This is a great one off episode. No heavy continuity, and just some really creepy visuals and thoughts to haunt you when you head off to bed. There’s also some insight into The Doctor’s childhood before he was ever “The Doctor”, and a well-conceived tie-in to “The Day of the Doctor” and the reason the War Doctor ends up in a barn.  Plus fans playing the DOCTOR WHO: LEGACY game on their phones, tablets, or Facebook might have caught the reference The Doctor threw out about Sontaran’s tampering with time; which is a direct reference to the story of the game.

Next week: bank heist in space!