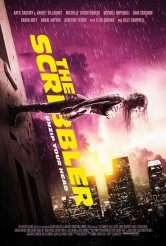 THE SCRIBBLER can’t be accused of having too few ideas. In fact, the movie, written by Dan Schaffer and directed by John Suits, has plots that crisscross so much that they tend to cancel one another out, even though it looks as though the effect is meant to be cumulative.

The primary and most intriguing notion here is that Suki (Katie Cassidy), already having gone through years of treatment for multiple personality disorder, begins to fear that the self she experiences as “her” is really one of her “alters” and that her real personality is the mute, possibly murderous Scribbler.

That’s quite a lot to absorb right there, and if THE SCRIBBLER  had stuck with it in narrative, psychological, emotional and even metaphysical terms, the film might have had some real depth. Certainly Cassidy is a game performer and Garret Dillahunt, as her best friend and sometime boyfriend Nolan, is utterly committed while remaining perfectly flexible.

However, THE SCRIBBLER also has an unethical psychiatrist (Billy Campbell) who has invented a machine that strips Suki of her extra identities one at a time, even though it has some odd and possibly lethal side effects.

Then there’s the matter of the halfway house for dangerously ill psychiatric patients, where Suki and Nolan have apartments and there are strange doings by strange neighbors, plus a police investigation that involves both a detective (Michael Imperioli) and another therapist (Eliza Dushku).

All of these elements when combined leave little time for contemplation. We get expository dialogue and some “meanwhile, back at the ranch” cutaways whenever Suki makes a discovery too big for what the filmmakers assume are the limitations of the audience.

This does a disservice to both us and the movie. Suki’s “Scribbler” persona gets upstaged by the work of the psychiatrist, and the suspense possibilities of an apartment building full of dangerous and delusions residents go largely unexplored.

Still, THE SCRIBBLER has its positive attributes. Director Suits creates a pleasingly uncomfortable, dense atmosphere and has some great visual ideas, even if they require some set-up (how Suki winds up in a specific costumes takes awhile, though it’s just about worth the wait).

Besides Cassidy and Dillahunt, the cast includes several alum from BUFFY THE VAMPIRE SLAYER – Michelle Trachtenberg (Dawn on the series), Dushku (Faith) and even Richard Riehle (Buffy’s first Watcher) – as well as the determinedly arrogant Campbell and a playful Gina Gershon. These aren’t the biggest roles any of these actors have ever had, but they mostly play them with gusto.

THE SCRIBBLER doesn’t live up to its premise, but it still has some good scenes and provides food for thought.