Home » A Walk Among the Tombstones movie review 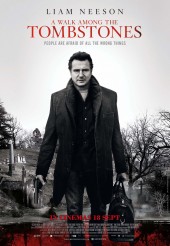 ©2014 Universal Pictures
A WALK AMONG THE TOMBSTONES movie poster
Reviews

Movie Review: A WALK AMONG THE TOMBSTONES

Serviceable thriller with a nasty streak

Although Liam Neeson still plays all sorts of roles, these days – after two TAKEN movies, plus NON-STOP – it’s hard to see him in an action thriller and not have the equation of his character = badass in mind. A WALK AMONG THE TOMBSTONES tries to play that down a little bit so that we have a modicum of fear for the safety of Neeson’s Matt Scudder, though between the film’s style and any meta-knowledge of the Lawrence Block novel on which it’s based, that fear goes only so far. Scudder has some back story and issues to work through, and Neeson is great at playing men who have already seen and done too much when we meet them, but we don’t doubt that once the evildoers anger him, they have definitely crossed the wrong guy.

Scudder is a former NYPD cop who gave up his badge – and a drinking habit – after one particularly hairy day on the job (we eventually find out more details than what we see in the prologue). Now he’s an unlicensed private detective, though at first he doesn’t want to take the case brought to him by a fellow Alcoholics Anonymous member (Boyd Holbrook). This is because the client, the AA member’s brother Kenny (Dan Stevens), is a big-time drug dealer whose wife has been kidnapped. Kenny needs Scudder’s help because he’s paid the ransom, but the kidnappers still haven’t returned their victim. Scudder tries to help, but succeeds only in helping Kenny retrieve the wife’s dismembered corpse. This would seem to be the end of it, but then Scudder finds a disturbing pattern.

As mysteries go, A WALK AMONG THE TOMBSTONES is decent enough, with the primary question being what’s the connection rather than who’s doing it. That’s a question, too, but the answer is not a revelation. There’s also a weird streak of nastiness here that doesn’t wind up going anywhere. This reviewer says this as someone who likes gory horror films – when sadism is depicted (rather than happening offscreen) in a film, there’s usually some narrative, psychological and/or motivating purpose for it, so that a main character is scared, angered or devastated into taking things personally. It seems like Scudder would  do exactly what he does even if he just had the framework of what the story’s psychos are up to, the rape and torture scenes don’t go anywhere and we don’t even get any insight into the people who are doing it, apart from the fact that we wish Scudder’s wrath upon them. Horror for its own sake is fair enough when viewers know this is what they’re getting going in, but it seems out of place in what is otherwise a movie so mainstream that it offers a bonding experience between Scudder and a homeless teen (Brian “Astro” Bradley).

Screenwriter Scott Frank, making his directorial debut here, seems to be going for the nightmare quality of MANHUNTER or THE GIRL WITH THE DRAGON TATTOO, but he doesn’t maintain it outside of the torture scenes, and he never makes the crucial connection between the depravity we see and the protagonist. There isn’t even a real sense of moral muddiness, despite the milieu – Scudder may have a checkered past, but he seems righteous enough now, and we never see anything of the dealers’ lives that makes them appear to be anything worse than outlaw businessmen. The movie works on a basic level, but it doesn’t fulfill the ambitions it seems to have