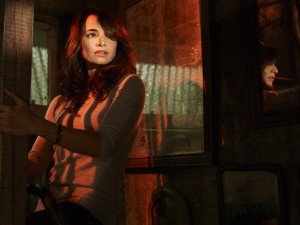 In FX’s THE STRAIN, Sundays at 10 PM, a particularly vicious breed of vampires is overrunning New York City. The series is created by Guillermo del Toro and Chuck Hogan, based on their trilogy of novels; both are executive producers, with del Toro directing some episodes and Hogan writing several segments. Among their main characters are a small band of humans combating the plague, including Centers for Disease Control doctors Ephraim Goodweather, played by Corey Stoll, and Nora Martinez, played by Mia Maestro.

Maestro, a native of Buenos Aires, Argentina, first hit the U.S. TV radar as Nadia Santos, half-sister of Jennifer Garner’s Sydney Bristow, on ALIAS. Some of the actress’ other gigs include the feature films THE MOTORCYCLE DIARIES and POSEIDON and the TV series CRUSOE.

At a party thrown by Fox and FX for their actors, creative personnel and the Television Critics Association, Maestro talks about fighting a disease that’s personified by bloodsuckers.

ASSIGNMENT X: Have you played a doctor before?

MIA MAESTRO: No, I don’t think I have. Never a biochemist.

AX: Did you do any research for that aspect of the character?

MAESTRO: Of course. It’s a very specific profession. A biochemist has a very unique lifestyle, so we did quite a lot of research for that.

AX: What is the most interesting thing you learned in your research?

MAESTRO: I think how fearless these people are, and how committed to finding the viruses and doing research and, in a way, how brave they have to be in order to be facing these entities or viruses that could be killing them at any given time. They can go into a Hazmat suit. You have to be pretty brave just to do that.

AX: Has anything on the show grossed you out?

MAESTRO: No, not really. It takes a lot to gross me out [laughs].

AX: Nora has a past with Eph – they used to be lovers. What is her attitude toward him at this point? Is she exasperated by him because he’s so stubborn and kind of blind when it comes to relationships?

MAESTRO: No, not at all. I think they’re best friends, they’re amazing co-workers, they get along extremely well, they’re best friends, and Eph’s going through a divorce and has moved out of his house, so she understands that he’s going through a transition, and they’re in this gray area where they have this sort of relationship where it is not clear yet what it is, if they’re lovers, if they’re just friends, if they just spent a few nights together. So I think that’s kind of interesting in the script, that it’s not completely – their relationship doesn’t have a title yet.

AX: Is Nora’s relationship with her mother, played by Anne Betancourt, a big part of the show?

MAESTRO: Yes, it is.

AX: How are those scenes to play?

MAESTRO: It was really wonderful and there are a lot of emotional scenes between Nora and her mom. I think it’s going to shape Nora’s arc throughout Season 1 quite strongly.

AX: Did you do any research into dealing with a parent who’s struggling with dementia?

MAESTRO: Of course. And in fact, I’ve had to face that myself with some members of my family. It’s something that a lot of people have to deal with, and it’s a really sad, just devastating disease for the family that have to witness that, and finding the balance for Nora of how to deal with that, where at the same time, all this is happening. The world is changing, and there’s this amazing, ominous bio-strain that is hitting New York City at the same time for her to be caring about her mother and protecting her mother when she doesn’t really know what’s happening.

AX: Do you have a lot of physical action?

MAESTRO: I do, yeah. We all do, which is quite exciting.

AX: Do you have a favorite thing you’ve gotten to do?

MAESTRO: Playing with swords is a really good thing.

AX: Do you have a sword master on the show?

MAESTRO: Not a sword master, but we do have [a stunt coordinator, Jamie Jones]. [The characters are] amateurs with their swords, but they are becoming fighters, so little by little, they’ll become more skilled with them.

AX: And how is Guillermo del Toro to work with?

MAESTRO: Wonderful. Guillermo’s a wonderful director to have and a producer, and this is Guillermo’s baby. He’s been working on this show for a long time, so I’m quite honored to be playing Nora.