This Is Where I Leave You movie review 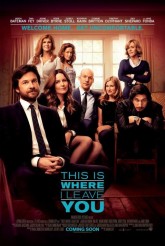 ©2014 Warner Bros.
THIS IS WHERE I LEAVE YOU movie poster
Reviews

Movie Review: THIS IS WHERE I LEAVE YOU

There are some outstanding performances in THIS IS WHERE I LEAVE YOU, which elevates the movie into something actually watchable, as opposed to a couple of good moments interspersed with scenes meant to be funnier or more affecting.

The set-up is this: Mort Altman has died. His widow, the formidable therapist and best-selling author Hillary Altman (Jane Fonda), tells their four adult children – Paul (Corey Stoll), Judd (Jason Bateman), Wendy (Tina Fey) and Phillip (Adam Driver) – that Mort’s final wish was for the family to sit Shiva for him. Sitting Shiva is the traditional Jewish ritual of sitting and mourning the dead for seven days. Several of the kids protest that Mort was Jewish but atheist, while Hillary isn’t Jewish at all. Hillary insists this is what Mort wanted, so the far-flung offspring gather at the family home.

Let’s pause here for a moment. Yes, there needs to be a reason everyone comes together and stays for the week, and sitting Shiva is as good as any. However, with all the disclaimers (Mort’s non-belief, Hillary’s non-Jewish status) and the resistance of the characters to having to stay for a week, credibility is stretched mighty thin at the outset, evidently for the sake of a conceptual joke that is mild at best.

This is indicative of how THIS tackles a number of its subplots. We’re meant to be invested in various romances, ongoing and ended, as well as sibling relationships that aren’t nearly as frayed as the characters think they are. We keep getting told what to feel and how to see these people, rather than just having situations speak for themselves, and this gets old fast … or at least it would if the acting wasn’t so good.

Bateman is so personable and inflected as Judd that we can’t help but want him to resolve his crazy-making issues with various types of family. He registers everything quietly, as though absorbing it and letting what he sees and hears become part of him. Bateman plays his character in a way that gives credence to how terribly hurt he is by an incident at the start of the movie and his well-modulated reactions to his family make us warm to him because he’s not overdoing anything.

Fonda gives Hillary a ferocity of spirit that allows us to believe she is fully comfortable doing things that make her kids cringe – for starters, putting all of their neuroses in her best-selling nonfiction psych tome. She also is convincing as a woman who genuinely loves her offspring. Stoll, as the oldest son who ran the business Dad began, is fully convincing as a guy who feels put-upon and mocked for doing the right thing, and Fey is simply endearing.

However, there’s so much going on that nothing seems to be given time for real examination; without that depth, there’s little resonance. The humor is muted and there aren’t many surprises, so what we’re left with is a lot of good acting and the feeling that we may have watched about one season of a restrained family comedy-drama crammed into a film’s running time.

Article Source: Assignment X
Article:Movie Review: THIS IS WHERE I LEAVE YOU