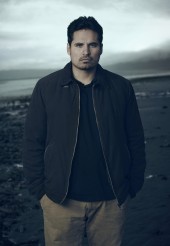 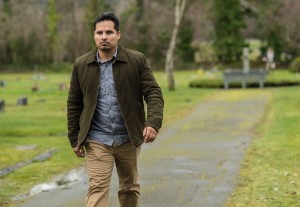 In Fox’s ten-part miniseries GRACEPOINT, Thursdays at 9 PM, a young boy has been murdered in a small Northern California coastal town, and everyone is a suspect. This includes the deceased’s father, Mark Solano, played by Michael Peña.

Peña, a Chicago native, has a film and TV career going back to 1994. He played Detective Armando Renta on a season of THE SHIELD. More recently he’s starred or co-starred in films including TOWER HEIST, END OF WATCH, AMERICAN HUSTLE and played the title role in CESAR CHAVEZ. This week, Pena can be seen in FURY, the World War II drama starring Brad Pitt; next year, he’ll appear as Castillo in ANT-MAN.

Peña has been in a lot of films and TV regarding crime, but this is the first time he’s played a civilian rather than a cop or an obvious criminal. This is something he hasn’t contemplated until now, though – when asked if this is the case, his response is, “Holy s**t. Yeah.” He laughs. You just blew my mind. I love those kinds of movies, I love those kind of shows. Even at home, the things that I watch are FORENSIC FILES and things like that. I read so many scripts and I’m like, “How can they actually do that?” So that’s why I gravitate towards those kinds of things. But I guess this is one of the first times that I’m not a criminal or a cop.”

Peña is a participant in Fox’s Q&A session for GRACEPOINT and the Television Critics Association. GRACEPOINT is based on the British series BROADCHURCH, created by Chris Chibnall. In both versions, David Tennant plays an out-of-town investigator brought in to explore the case. His partner in GRACEPOINT is played by Anna Gunn, whose character Ellie Miller is good friends with Mark Solano’s wife Beth, portrayed by Virginia Kull.

When the Q&A session finishes, Pena remains to discuss GRACEPOINT at greater length.

ASSIGNMENT X: How much did you work on the onscreen relationship with Virginia Hull?

MICHAEL PEÑA: We hung out quite a bit in the beginning. To be honest with you, I think this is going to be her big break, just a breakout role for her. She’s instantly lovable, so sometimes you’ve got to hang out a little bit – with her, it was right from the get-go, you know what I mean? I was like, “This is going to work easy.” Sometimes you’ve got to put in the work [to make a relationship convincing], sometimes it doesn’t work.

AX: It seems like getting into the mindset of someone who has lost a child would be very tough. How was it sustaining that for the shooting length of the show?

PEÑA: I have a five-year-old kind, and I like to use my life for inspiration or whatnot. This one I really didn’t need it. I can’t even fathom losing my kid, but the scenarios were built so that it was easy to go there. The director [James Strong] really helped out. You saw [in the first episode] the one where I see the kid [at the morgue]. It was directed really well where I went on set, and basically, the director put me in a room, and it was blocked out already. And he just said, “You just have to hit your mark and then do whatever you do.” And then they used, I think, the first take. And it’s difficult, to be honest with you, it’s almost like playing a sport of whatever. You get used to that kind of muscle, and then you kind of bring it home a little bit, but thank God we had Jacki Weaver [who plays Susan Wright] with us, who is very charismatic and funny and very humble at the same time. But then when I got home, I was like, “Waah!”

AX: Mark Solano is right now a very angry man. Then again, assuming your character is not guilty, if your child was murdered and the police thought you might have done it, would you walk around wanting to punch everybody in the face?

PEÑA: Oh, yeah. I thought about that for just a little bit. If my son died and I got accused, I’d be, “Go f*** yourself.” I’d be, “Get out.” I’d be so mad. That’s the only time that a person would actually talk to a police officer like that, and I took full license with it.

AX: Is there anything else you’d like to say about GRACEPOINT right now?

PEÑA: Yeah. I’ve seen them [both GRACEPOINT and BROADCHURCH] and I do think that it’s different. You’ve got to look at it as an audience, not like as an actor. At the end of the day, you’re presenting something that’s a page-turner as an actor, but then also, there are cliffhangers. There are cliffhangers that actually work and that are awesome. Those are really hard to come by and at every break, you’re like, “What’s going on?” I remember I was trying to get answers from [executive producer/show runner] Daniel Futterman and he just wouldn’t give them to me. He said, “You got to read it, buddy!” And I think that’s what the audiences are going to get.