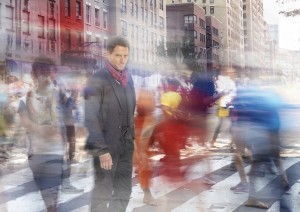 In ABC’s new series FOREVER, Tuesdays at 10 PM, Ioan Gruffudd (pronounced YO-wen GRUFF-uth) plays Henry Morgan. Henry died for the first time over two hundred years ago when he was murdered while defending the life of another man. Since then, Henry has died many, many times – and always revives, intact, in water and naked.

By 2014, Henry has gone through many identities, locales and changes of profession, though he still is trying to discover why he’s immortal. He’s currently a medical examiner for the New York Police Department, a job that has him working with NYPD homicide detective Jo Miller (Alana de la Garza).

Actor Gruffudd, a native of Wales, has had probably more onscreen identities than Henry has adopted. After working in Welsh television, Gruffudd played Jeremy Poldark in the 1996 POLDARK remake and had a role in James Cameron’s TITANIC, before being cast as the title character in a series of HORATIO HORNBLOWER telefilms. Other credits include 102 DALMATIANS, starring opposite his real-life wife Alice Evans, playing Phillip Bosinney in the 2002 FORSYTHE SAGA miniseries, Reed Richards/Mr. Fantastic in two FANTASTIC FOUR features, Lancelot in KING ARTHUR, British abolitionist William Wilberforce in AMAZING GRACE and leads in U.S. series CENTURY CITY and RINGER.

ASSIGNMENT X: Were you looking to do another American series when FOREVER came along, or is this just something that came across the transom and you went, “Oh, I like this”?

IOAN GRUFFUDD: Well, I guess every pilot season comes around and you throw your hat in the ring, I suppose [laughs], and I was actively looking for a series. I’m a family guy now – we [Gruffudd and Evans] have two children now, Ella, and Elsie – and it would be lovely to get some sort of consistency into my life. And this I read and fell in love with and fell in love with [FOREVER creator] Matt [Miller] and the concept of it all and then screen-tested and got the job.

AX: Was part of the appeal here that you are the primary lead, rather than part of an ensemble or, as you were in RINGER as the husband of both of Sarah Michelle Gellar’s characters, supporting the primary lead?

GRUFFUDD: No, no. You choose things based on the timing of it, based on the character and what you see on the page. And RINGER, I just loved the project, I loved the part and I loved where they were taking this, they were trying to weave this story. And I was very sad when it all came to an end. And this happens to be the leading path and there are so many different elements to him, that make up Henry Morgan, that’s what really drew me to the part. 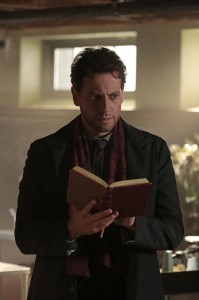 AX: Just talking degree of difficulty, is this easier or more difficult than all of that green screen on RINGER?

GRUFFUDD: We’re physically in New York shooting the series, we have soundstages for the medical examiner’s office and the [police station] bullpen, but a lot of the stuff, we’ll be on location, and it’s great when you’re actually walking in the streets of New York, and walking and talking and responding to another character and not having to pretend the surroundings.

AX: The first time Henry dies, he’s shot while below decks on a ship and thrown overboard. Did you have any moments in the battle and the shipwreck of going, “Oh, my God, I’m back in HORATIO HORNBLOWER”?

GRUFFUDD: Absolutely. Absolutely. I just remember s feeling very claustrophobic and having to crouch, because the beams are so low. Yes, I was suddenly back there again, and I thought, “How delightful that here I am again, venturing out to be a lead in my own show, and Henry’s story begins on a slave ship [while Henry is the ship’s doctor] coming over to America.”

AX: With two hundred years’ worth of memories, is Henry ever in danger of having memory overload?

GRUFFUDD: Yes, but I’m sure there will be moments when things come to him suddenly from nowhere, from the annals of his memory, that will trigger something and he’ll have to go back and research it again.

AX: Do you have any concerns about having overload from all of Henry’s death scenes?

GRUFFUDD: What’s interesting is, the way we shoot it, we don’t necessarily show the blood and guts of the death. We show a dead body and we see the death spiral in his eye. So what’s going to be interesting and exciting is for the audience to see how other people possibly might react to that and the secrecy surrounding the fact that every time he dies, where does he go? Where does he disappear to? We know that he comes out in the Hudson River, but what actually happens in the actual event, the impact of when he dies?

Wvery occasion is different and you have to put it in a context. This is going to be most likely for dramatic effect and for pushing the story forward and every time he does this, he’s in pain. He experiences the pain of death, so it’s not a pleasurable thing for him. We’re not going to take it lightly at all.

AX: Do you have conversations with Matt Miller about what Henry would do and say?

GRUFFUDD: We have a great relationship. He’s such a delightful man and he was very inclusive with me and all of us, actually, as actors on the project, so if I had any questions or if I’m anxious about anything, I can just pick up the phone or text him. We’ve struck up a very good rapport already.

GRUFFUDD: Yes, I sat down with a medical examiner and we have a medical examiner that will be our go-to guy for any of these elements that are thrown up before us on a weekly basis. But of course, because it’s television and it moves very, very fast, you have to paper over some cracks in the techniques here and there.

AX: As for other things Henry does, you’re presumably used to on-camera running and jumping and hitting people at this point …

GRUFFUDD: Yes [laughs], I’ve been on horseback and bludgeoning people, shouting commands at people. So I think all that experience of playing all these parts and periods has lent them to cast me as this character, and I really do enjoy what we’ve done so far with flashing back to the 1940s for the Second World War and even earlier, to I think it was the late 1800s.

AX: Is Henry always the same sort of person whatever time period we see him in during flashbacks, or does he have different personalities to suit the times, as it were?

GRUFFUDD: Well, when he meets and falls in love with Abigail [Mackenzie Mauzy], as we witnessed in the pilot, I think he’s just fallen in love and his fear of being caught with this secret [of immortality] sort of goes to one side and he’s driven by that emotion and what’s going to be interesting is, I think we’re going to see the evolution of, “Oh, s**t, I’ve fallen in love with this person, how am I going to reveal this secret to her? Do I dare reveal this secret to her?” So I think he will show real emotions and be lighthearted.

I think there’s tremendous scope there, isn’t there – I mean, he certainly knows his wines and knows his alcohol, so why not see him at a depressing time in his life when he’s really probably drunk? That would be interesting to explore – he fell off his horse or something [and died] because he was drunk.

GRUFFUDD: Yes, I finished two movies, actually. I did a movie called HOME INVASION, which is a Joel Silver horror film, and I just finished a big hundred-million-dollar Warner Brothers/New Line movie called SAN ANDREAS, with Dwayne Johnson as the lead. It’s about the big earthquake that hits California. I shot that in Australia, believe it or not.

AX: Is there anything else you’d like to say about FOREVER?

GRUFFUDD: Everybody is so curious about the mythical element of it, it shows to me that people are curious about the show and delighted by what they’ve seen with the pilot. So I’m just excited about going on that journey now.