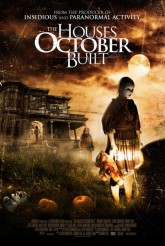 Probably no found-footage movie since THE BLAIR WITCH PROJECT has persuaded much of the viewing public that it’s for real, but the makers of THE HOUSES OCTOBER BUILT give it a go, using people’s real names and an upfront explanation of who shot the purported additional footage.

In fact, director Bobby Roe and his co-writers Zack Andrews & Jason Zada, have come up with a fairly inspired premise. Sure, the big Halloween horror shows at Universal, Knott’s Berry Farm and the like are regulated and inspected to within an inch of their virtual lives, but what about the haunted house events held around the country, especially in and around small towns? With no safety controls other than assumed common sense and no civic supervision – and no background checks on employees to make sure they’re not bonkers – these independent haunts are places where anything could happen. It’s unclear if the accidents and crimes discussed in HOUSES are factual, but they’re certainly plausible.

HOUSES takes this as a jumping-off point, then gives us five friends – played by the Roes Andrews, Brandy Schaefer and Jeff Larson – who are piled into an RV, seeking the most “extreme” and scary haunts, especially a legendary traveling event known as Blue Skeleton.

This goes pretty much where we might expect, but the filmmakers raise some good questions along the way, such as what do people consider scary, why do they want it, how much is too much and where’s the line?

Given how fertile these ideas are, it seems like HOUSES doesn’t allow itself enough time to explore them as fully as it might. We get the usual set-up, though the exact payoff is slightly unexpected. The scares work well enough, but some of the ones we simply hear about in interviews sound more engrossing. Of course, the biggest scare here is what if we found ourselves in the characters’ situation, which may be more intellectual than visceral, but it’s still very viable.

There isn’t too much differentiation between the male characters; Schaefer stands out because she’s the one character who’s not pretending to be fearless and who has a negative reaction during a sequence in a strip club. However, everyone is good, natural and has conviction; nobody ruins the mood by over- or under-doing things.

THE HOUSES OCTOBER BUILT is an entirely worthy Halloween film and it may legitimately make some folks think twice about off-the-map horror excursions.