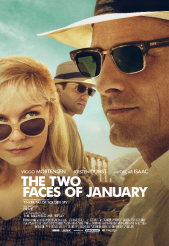 A low-key but tense Hitchcockian thriller

If Alfred Hitchcock were in a low-key mood – no crop-dusters or briefcase bombs – he might have made something like THE TWO FACES OF JANUARY, the directing debut of Hossein Amini, who adapted the screenplay from Patricia Highsmith’s novel. In fact, Amini has taken pains to make JANUARY look as though it was made in the year it takes place, 1962, when Hitchcock was still active, with subtly faded cinematography and landscapes that are simultaneously sunny and ominously shadowed.

Chester McFarland (Viggo Mortensen) and his much younger wife Colette (Kristen Dunst) are vacationing in Greece when they cross paths with American ex-pat tour guide Rydal (Oscar Isaac). We can see that Rydal is at least a bit of a huckster, mistranslating interactions between the nice tourists and a street vendor so that he can pocket a bit of extra cash, but it’s hard to tell how far his illicit leanings go. Rydal interested in the glamorous McFarlands, they’re a little curious about him – but the situation turns very dangerous once a private eye (David Warshofsky) shows up trying to collect on an old debt.

The plot moves along smoothly, taking us from wondering who these people are to what will happen next, and the twists and turns feel logical enough. Amini, Mortensen and Dunst all have the period down, making their sojourn in manner and appearance of the ‘60s look and sound effortless. Paradoxically, what makes Isaac seem slightly out of place is also what makes him appealing here – in the film’s era, naturalistic vulnerability was not yet something one saw much of in male characters.

Technically, THE TWO FACES OF JANUARY seems expert. Where it lags is in its relative lack of humor – it’s not pretentious, but there isn’t much levity to be found here – and a sudden emotional epiphany on the part of one character that doesn’t fully translate. It’s possible to be enigmatic about a character’s emotional interior, but in that case, unless the change illuminates who the person was before the epiphany as well as after, it doesn’t resonate.

On the flip side, moments that are meant to be revelatory are sometimes too restrained. The balance between character study and noir mystery is off here – we’re at arm’s length when we shouldn’t be, so that by the end, we’re curious but not engaged. THE TWO FACES OF JANUARY is good, but its ambitions exceed its achievements.