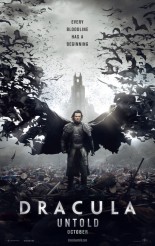 Surprisingly good fun much of the time

Audiences at this point have a right to be wary of anything with “Dracula” in the title, for the reason that the name at this point conjures less dread of the undead than dread of unoriginality. The master vampire, as villain, tragic hero and/or some combination thereof has been explored pretty thoroughly. As for less familiar versions – Vlad Dracul as young human warlord isn’t much to do with what we think of as Dracula, so that would be false advertising in a sense, and why should Vlad newly coming into his powers be any different than any other new vampire story, of which there are plenty already?

Well, hold on there, because writers Matt Sazama and Burk Sharpless and director Gary Shore, with a great assist from leading man Luke Evans, really have come up with a new spin. For starters, vampire fiction – like mu in literature and in dramatic media, tends to focus on relatively young people when it’s a tale of someone new to vampirism.

Here, Prince Vlad Dracul (Evans) is a fully grown man, with wife Mirena (Sara Gadon), their children and the kingdom of Transylvania to rule. When Vlad was young, his father had given him as a hostage to the Turks, who turned him into a killing machine – he’s already known as Vlad the Impaler. Vlad, however, would like to put his remorseless warrior self behind him and reign in peace and prosperity. This is made difficult but not impossible by Transylvania’s pact

Vlad is worried by evidence of a Turkish scout party, which seems to have disappeared into a cave with a deadly occupant. Vlad manages to get away, and consults the local monastery on what exactly he encountered.

Alas, new Turkish ruler Mehmed (Dominic Cooper) is insisting on a tribute of one thousand boys to be made into warriors for the Turks, plus Vlad’s eldest son Ingeras (Art Parkinson) as hostage to be turned soldier. Vlad decides that, as a prince and as a father, he isn’t going to stand for this, but how can the relatively small Transylvanian army withstand the massed might of the Turks? Perhaps if Vlad acquired the powers of the creature in the cave …

Thus does DRACULA UNTOLD earn its title – we really haven’t heard this version before.  This is the epitome of a deal with the devil, for the noblest motives. Vlad believes he has an out, and although we can guess in the broadest strokes what will happen, it’s still surprising how actually enjoyable it is getting there. Yes, there are moments that fall into camp, but Evans has so much conviction in what he’s doing and the filmmakers are having so much fun with their medieval take on one man vs. an army that there’s a sense of actual euphoria to a lot of the proceedings. When Vlad realizes he’s now capable of transforming into (and back out of) a flock of bats and how handy that will be in battle, the look on Evans’ face is just what it should be – it’s a wordless moment of utter cool.

Other moments don’t fare so well, due partly to underwriting of the supporting characters. It’s nice that Mirena stands by her husband and doesn’t slow down the plot by screaming or freaking out, but she doesn’t have much subtext, and Cooper’s Mehmed seems evil for the sake of being evil, rather than having faith in his own strategy. There there’s the epilogue, which raises a whole host of questions – we understand they’re hoping for a sequel, but this is pushing it. (Without getting too spoilery, why has it taken certain characters this long to begin going about their business?)

Then there’s that PG-13 rating. It’s okay not to be splattered a la 30 DAYS OF NIGHT, but not showing at least neck punctures is overdoing caution. (DRACULA is in the film’s title.)

On the upside, Charles Dance scores as a menacing, prickly individual who clearly has his own agenda. Director Shore and cinematographer John Schwartzman achieve a sumptuous dark look that conveys gloom and foreboding without being too dark to see (a balance that some filmmakers never strike) and the score by Ramin Djawadi (who also composes for GAME OF THRONES) helps set the mood.

DRACULA UNTOLD has its flaws, but when it works, it soars like a flock of bats.