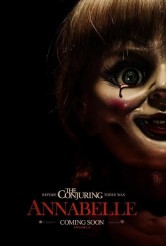 A prequel to THE CONJURING with a ‘70s feel

ANNABELLE is a prequel to last year’s THE CONJURING, explaining the history of that way creepy doll that was seen in the earlier film. We even get a scene from the earlier film, with two young nurses earnestly explaining to psychic investigator Ed Warren (who is off-screen here, though his voice is still that of THE CONJURING’s Patrick Wilson, going uncredited in ANNABELLE) that the doll one of them received as a gift is terrorizing them. The doll has said she houses the soul of a little girl named Annabelle.

We then go back a year or so earlier, to 1969, when the media is reporting on Charles Manson and his followers and speculating about the possibility of other homicidal cults. At the same time, young resident doctor John (Ward Horton) presents his doll-collecting, pregnant wife Mia (Annabelle Wallis) with a collector’s item: the large doll in the white wedding dress. Mia is thrilled, despite the fact that, even in mint condition, this particular doll brings to mind Edgar Allan Poe, or perhaps H.P. Lovecraft, more than Madame Alexander.

Even so, the doll remains an innocuous and inanimate object until one bloody, horrific night. Mia turns out to be relatively clued-in for a horror movie heroine and, after a few inexplicable incidents, wants to move. No problem – John is also smarter and more in tune with his wife’s needs than many horror movie husbands and actually wants his wife to feel safe (he also likes the idea of moving closer to his new job). However, as the tagline for another horror film goes, it’s not the house that’s haunted.

Where Annabelle the doll gets her name is quite an alarming piece of business, and director John R. Leonetti crafts big jump scares with enough frequency for ANNABELLE the film to qualify as effective. Gary Dauberman’s script has internally consistent plot logic, though eyebrows may rise sky-high at some of the movie’s assertions about the actions and motives of what are meant to be good people.

Indeed, some of the attitudes and the general mood of ANNABELLE make it feel like a scary TV movie from the ‘70s, the kind that felt absolutely chilling while it was airing but had a very era-specific type of storytelling and morality. Even though ANNABELLEis rightly rated R for terror – which says something, as there is no language or nudity – there is something very tidy about it by the end.

There’s a nod to ROSEMARY’S BABY with the names of the main characters (Mia and John seem to have been named after its stars, Mia Farrow and John Cassavetes), but ANNABELLE goes for effects that are more visceral than philosophical, so that we wind up with no lingering sense of unease.

Even so, the film’s jolts are sufficient to satisfy its sheer horror quotient, and it’s truly refreshing to see main characters in a horror film who have rational, proactive responses to what’s happening around them. Wallis and Horton do well with their roles, and Alfre Woodard makes sense of her underwritten character.

ANNABELLE will likely make seasoned horror fans giggle occasionally, but it fulfills its basic genre duty – for much of its running time, it’s scary.