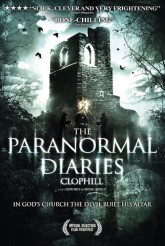 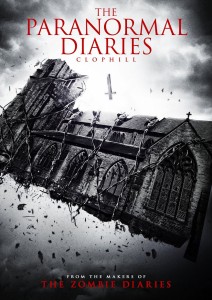 At the start, let’s salute the independent, do-it-yourself filmmaking ethos of writer/producer Kevin Gates and his co-director Michael Bartlett, along with their excellent choice of locations and the naturalistic performances they get from their cast. They’ve found a creepy location with some real mythology behind it. Leads Craig Stovin and Criselda Cabitac are just right as two participants in a three-day experiment whose curiosity jousts with their instincts.

As to the film THE PARANORMAL DIARIES: CLOPHILL, however, it must be said that this has got to be one of the most boring examples of a fake documentary film, in or out of the horror genre. In a way, CLOPHILL is a curiosity. Paranormal TV “reality” shows like GHOST HUNTERS purport to depict actual events, whereas CLOPHILL in its packaging purports to be a narrative film.

Listening to Gates’ commentary in the special features section (the DVD also comes with a commentary track from the actors and deleted scenes), the filmmaker explains that there wasn’t a script as such; actors were encouraged to improvise. On the one hand, the performers have conviction. On the other hand, they don’t have a way with words. Mundane back and forth chat may make for verisimilitude, but a little of it goes a long way. Moreover, their characters have little back story and less plot – they simply clomp around the remains of a ruined church in rural England, looking for cultists, trying to conjure up ghosts and/or demons and explaining how their recording equipment works.

Something happens about fifteen minutes from the end of the movie, which is far too late for us to get worked up about it. Yes, this would be alarming if it actually occurred to any of us, but at this point, only the staunchest fan of this sort of thing will still care what’s happening.

A fictional documentary, unless it’s parody, ought to bear some semblance to real life. However, depicting a lack of anything noteworthy happening for the greater part of the movie is not the best use of synthetic realism or the possibilities of the situation – to say nothing of the viewer’s time.