The executive producer discusses adapted the BBC series for the U.S. 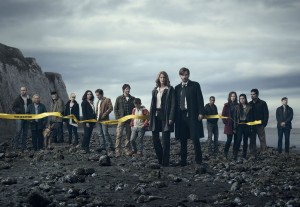 GRACEPOINT, the ten-episode miniseries airing in weekly installments on Fox beginning Thursday, October 2, is based on the eight-part British miniseries BROADCHURCH. In both, a young boy is found murdered in a small coastal town and in both, an outside police detective is brought in to supervise the case. He works with a local female police detective whose young son was the victim’s best friend. One more similarity between the two versions – in both, David Tennant plays the new-to-town detective (called Alec Hardy in BROADCHURCH and Emmett Carver in GRACEPOINT).

Dan Futterman and his wife and frequent writing partner Anya Epstein serve as show runners on GRACEPOINT; Futterman is also an executive producer, along with Carolyn Bernstein and BROADCHURCH creator Chris Chibnall.

Futterman earned an Adapted Screenplay Oscar for his script adaptation of Gerald Clarke’s biography CAPOTE. He was also on the writing staff of IN TREATMENT and has another fact-based feature drama, FOXCATCHER, due in theatres. The Maryland native also has an ongoing career as an actor – Futterman was a series regular on JUDGING AMY and played the late journalist Daniel Pearl in A MIGHTY HEART opposite Angelina Jolie.

Addressing an assemblage at the Television Critics Association press tour during the Q&A session Fox has set up for GRACEPOINT, Futterman addresses how GRACEPOINT does and doesn’t diverge from BROADCHURCH.

“Anya Epstein, my wife and co-show runner and I, Carolyn, Chris Chibnall, we all talked about how to transplant this show into America, and the first order of business was don’t screw up what works, because it was fantastic. And all of you probably saw it. It was great TV. So we didn’t want to break what was working. But we also wanted to raise this show in a different country. We have ten episodes as opposed to eight, and so we start to veer from the [original] storyline. And we introduced new characters, new potential suspects. The notion of Anna’s character being too close to the town, being both familiar with and also frightened of anybody who might have committed this crime is still very much a part of the show.

“There are some devoted viewers and cultured viewers who watched [all of BROADCHURCH] and loved it. We watched the whole show and loved it. I think that in the way the original viewers of [INFERNAL AFFAIRS], the Japanese move that THE DEPARTED was taken from, can watch it and realize there’s a DNA here that is exactly the same, but it’s set in a different place, and it’s going to start to change very, very rapidly. I think by the third and fourth episodes, you see very, very great detours, and it also reverts to form as well, because the genetics of the show are powerful, and they’re successfully powerful. But we deviated as much as we wanted to and as much as we could, while still trying to tell this beautiful story that has a beginning and now a different ending.”

While Futterman and his colleagues all assure their listeners that the crime definitely will be resolved this season, the show runner won’t say whether “a different ending” means a different killer. “I don’t want you to rule anybody out. That’s not to be coy, but I don’t think you should rule anybody out as a suspect. We end in a very different place.”

Following the panel, Futterman remains to answer some follow-up queries.

ASSIGNMENT X: Is the “why” of the murder – the motivation and the circumstances surrounding it – the same as it was in BROADCHURCH, even if the “who” is not the same?

FUTTERMAN: I’m sorry to be coy, but I think it’s best not to go there, because I don’t want you to watch and have any preconceived notions of what [a particular character] may or may not do. I also genuinely think – we’re talking about the BROADCHURCH audience – one of the joys of watching the show is, can I tell what’s going to happen based on what I know already? We were aware of that while we were shooting that.

As we start talking about it, in this way, it was a particular thing where we knew it was going to be in some ways the same, but does it immediately spark our imagination in terms of, what can we change, what will we change? We love it, but these are the things where maybe it wasn’t as successful as it could be.

AX: Are these things major or minor?

FUTTERMAN: We do both. And we talked to Chris and we were very honest. We said, “This felt like it was not as fully developed as it could be, we want to go in this direction.” It was a conversation about all those things.

AX: When you heard [Tennant’s] American accent for the first time, did that inform the character at all for you in any way, or by then had you written the whole thing?

FUTTERMAN: Well, we talked about it. He was toying with doing a New York accent, and we wanted very much to place it in the vast middle of America. We talked about it a lot. I didn’t hear it for the first time until we got to the set.

FUTTERMAN: It shoots on Vancouver Island.

AX: Were you going back and forth from there to the writers’ room?

FUTTERMAN: We were. Anya and I were swapping. We saw very little of each other.

AX: How do you work together as a professional team?

FUTTERMAN: Once we do, we do need a break from each other as well. It’s nice to come home and say, “Hey, honey, how was your day?” without knowing exactly how the day was. So at the end of this, I think we’re probably going to take a little break.

AX: So you’ll probably work on separate projects next?

FUTTERMAN: Yes. But I think that people like her a lot more than they like me, so it makes this relationship generally with people easier, because they can turn to Anya.

AX: Are you working on any new projects besides GRACEPOINT right now?

FUTTERMAN: I am. I’m in the middle of [writing a script that is] much more of an action movie. I just wanted to prove to myself that I could do it.

AX: Are you excited about FOXCATCHER’s upcoming release?

FUTTERMAN: I am excited about that. All three [lead actors, Mark Ruffalo, Steve Carell and Channing Tatum] – there are great performances throughout, but each of those three guys – everybody knows Mark Ruffalo as a great dramatic actor. Channing Tatum started in A GUIDE TO RECOGNIZING YOUR SAINTS, and you thought, “Who the f*** is that guy, that’s Marlon Brando.” And he kind of veered away from that, but he is amazing. Steve Carell is totally transformative – it’s amazing.

AX: Speaking of actors, do you want to continue to act?

AX: Well, you’re also a producer, can’t you give yourself an acting job?

FUTTERMAN: [laughs] I’d have to test for the network.

AX: How is adapting a script from a different script different from adapting a book or working on an original?

FUTTERMAN: This is sort of a roundabout way of answering that, but I’ve been writing a script that’s in a very different genre recently, and you get absolutely no help at all [in scriptwriting from] watching movies. You get enormous help reading the scripts that they’re made from. And so it’s not that different – it’s the words that you are adapting, rather than what ends up on screen, which is always edited and shuffled around and has visual stuff that is not on the page, and that’s what the director brings to it. But it’s not helpful as a writer, so it doesn’t feel that different from adapting a novel or non-fiction.

AX: What are you proudest of in the works that you’ve done?

FUTTERMAN: I obviously have special affection for CAPOTE, because of personal relationships that were involved in that and that I will always think about. There is stuff that I’ve done with Anya that I’m really proud of, stuff on IN TREATMENT that I’m particularly proud of.

AX: Is there anything else you’d like to say about GRACEPOINT that didn’t get asked on the panel?

FUTTERMAN: I just wish that people had talked to Jacki Weaver [who plays an enigmatic townsperson]. People say, “Why would you do this again?” When you have this kind of cast, you say, “Of course I’m going to do it, and something incredible’s going to happen.” I’m sorry Nick [Nolte, who plays a secretive newsstand proprietor] wasn’t here. It’s an incredible cast. I also wish Anna was here, because her performance is very different from Olivia Colman’s, not in a deliberate way, but just by virtue of who she is, and it makes David different in the show.