Been there, done that - a sloppy and very uneven episode 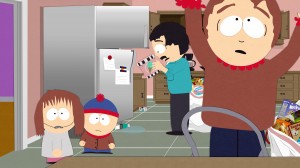 SOUTH PARK has a long history of having on and off weeks. Some times it’s just a matter of opinion – one person’s dislike is another person’s like.

So while I absolutely loved the Season 18 debut “Go Fund Yourself,” I wasn’t too fond of this week’s uneven follow-up “Gluten Free Ebola.” While there was an occasional chuckle (the sight gag of a penis exploding out of someone’s pants and flying in the air because of eating Gluten was by far the best), the rest of episode just felt like a retread of far better SOUTH PARK episodes and concepts.

One of the more interesting things about “Gluten Free Ebola” is the continuity it carries over from the last episode. Aside from purposeful three-parters or the occasional one-off reference, it’s rare that SOUTH PARK actually carries through events from one episode to the next in such a substantial way. They do it here as the whole school hates Cartman, Stan, Kenny and Kyle for swearing off school because of their failed start-up in “Go Fund Yourself.” The boys decide to get in good graces again by holding a great party for a good cause in hopes of getting people to like them again.

Their plans are momentarily thwarted when gluten becomes the new Ebola virus – eating it results in your dick flying off among other horrible things. Naturally, pizza and cake are out for a party if this doesn’t get resolved. Additionally, when Stan’s dad drinks a beer and is found out, he’s immediately quarantined at … Papa John’s!

It’s all rather silly, but everything lands with a big thud throughout despite the occasional minor smiles. Stan visiting his father at the quarantined Papa John’s is actually funny – since he’s not there to see his dad, but get information on the guy at work that knows the singer Lorde, but it’s a small victory in an otherwise lifeless episode.

It’s hard to rip SOUTH PARK too much, because I sincerely love the show and even when it has an off-week, it’s usually that an off-week. “Gluten Free Ebola” had the cards stacked against it after such a strong first week, but the show will rebound as it always does.

If anything, I like the idea of having more continuity with SOUTH PARK – where ideas carry over throughout the entire season. The show generally keeps things standalone so it can do crazy stuff and not have it be a major, permanent part of its mythology. If this is what Season 18 is going to look like – bring it on. It might not only give Season 18 a fresh perspective for creators Trey Parker and Matt Stone, it might result in more out of the box thinking for future episodes.