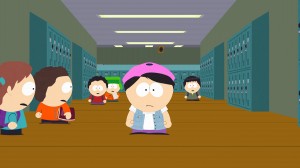 As I suspected last week, SOUTH PARK is experimenting with something they haven’t done before (except for their clear cut multi-parters) – they are establishing continuity throughout Season 18.

Usually, the show is very willy nilly when it comes to its weekly scenarios. Something happens one week, next week continuity has completely changed and it’s a whole other story with little reference to what has come before.

However, this year, it’s all changed. The Season Premiere ramifications led into “Gluten Free Ebola” which leads us to “The Cissy,” one of the most consistently laugh out loud SOUTH PARK episodes in some time.

The continuity strain is the pop artist Lorde. In the previous episode, Stan knew his dad knew someone at work that was a cousin to Lorde and needed her to play at their party. At the end of the episode Lorde was playing, and it looked suspiciously like Randy. The assumed joke was that he was pretending to be Lorde, because they couldn’t actually get the singer.

Not so fast. In “The Cissy,” which deals with transgender issues in modern society (but through the SOUTH PARK lens), we learn that Lorde is actually Randy. He auto tunes himself to sound like the chanteuse and performs as Lorde, but no one knows the difference, even when he covers up his moustache with make-up. Even Randy’s daughter thinks he’s a loser and he doesn’t understand her – despite the fact she worships Lorde and has “her” posters on her wall.

There’s a little bit of BREAKING BAD mixed into this as well, but this episode hits a groove and doesn’t stop. Everything is on target and the SPIN magazine reporter discovering “the truth” about Lorde is a great C story.

The other story going on concurrently is Cartman sick of not being able to use the boys bathroom because it’s always occupied, so he claims he’s transgendered and has the right to use the women’s bathroom because he’s now Erica. When the girls have an issue with this, they create a special bathroom for him in the janitor’s closet.

Then other people start having gender issues, including Stan’s girlfriend Wendy who comes to school dressed as a boy and claims she’s Wendall. The question mark remains whether Wendy is actually conflicted or if she was playing Cartman’s game.

Incidentally, Randy became Lorde, because he wanted to use the women’s bathroom, and he was so happy, he started singing in the bathroom.

The episode culminates with Randy having second thoughts about lying about being Lorde, but when his wife supports his decision and he realizes he’s making a difference with the youth of America, that it’s okay to continue the ruse.

Kudos to creators Trey Parker and Matt Stone for delivering such a funny and silly episode while also tackling a hot button issue like transgenderism in a tactful but humorous way. Their satire is always more about the hypocrisy surrounding a subject than anything else and they succeed with flying colors here.

Excellent episode, and now there’s the fun game of figuring out what random element in the current episode will spin off into the A story in the next episode. I hope they keep this differently type of storytelling up because it’s paying off quite well for Season 18.