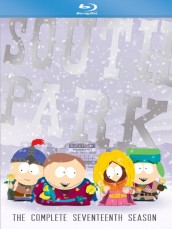 Last year was the first time SOUTH PARK didn’t have two seven-episode runs (one in the Spring, one in the Fall). Instead, everything was stockpiled in the fall and with four less episodes to boot.

It didn’t affect the quality of the show, and if anything, it strengthened the laser focus of the show particularly when they produced the epic and hilarious “Black Friday” trilogy that tackled commercialism in a truly original way – by way of GAME OF THRONES.

As with every season, there are hits and misses. The season kicked off with a good start with “Let Go, Let Gov” as Cartman becomes sick of the NSA spying on us. Some fun gags and some bizarre detours.

“World War Zimmerman” provides too much Cartman, while “Goth Kids 3: Dawn of the Posers” is very weak.

“Taming Strange” is very funny as Ike hits puberty and causing all sorts of trouble for Kyle and “Ginger Cow” is a clever idea that doesn’t live up to its potential.

The three episodes that make up the “Black Friday” arc is one of the best SOUTH PARK epic tales to date. Mixing in GAME OF THRONES, Japan-animation and the console war between XBOX 360 and Playstation 4, this is madness to the nth degree. It was also timed perfectly to Black Friday and afterwards. Great animation, sharp dialogue and an unpredictability that is sometimes SOUTH PARK’s biggest virtue all blend together seamlessly. Don’t be surprised if the “Black Friday” trilogy isn’t released as a standalone movie down the line.

The season ended with another strong episode “The Hobbit” which deals with photoshopped celebrities and self-esteem. Another potent episode that also includes some great jabs at Kayne West and Kim Kardashian. Priceless and a great way to end the season.

Admittedly, the SOUTH PARK seasonal box sets are usually light on special features, but the one saving is grace are the mini-commentaries provided by creators Trey Parker and Matt Stone. They talk for about five minutes during each episode where we usually understand the impetus for the episode or the problems in trying to deliver the episode in less than a week.

It’s also telling that we learn the full story of what happened when the ”Goth Kids 3” episode was postponed by a week (power outage, but the detailed reasons really showcase how insane it is to produce the show).

All the episodes also feature #SocialCommentary on every episode – which is tidbits and facts that pop up during the course of the episode.

And finally, there’s a handful of deleted scenes. This being a truncated season, there isn’t much left on the cutting room floor, but what’s here is worth watching – especially the Black Friday outtake which is pretty funny.

SOUTH PARK: THE COMPLETE SEVENTEENTH SEASON proves once again that SOUTH PARK, even as it ages, still retains its bite. It’s a perfect venue and system for Parker and Stone to comment on pop culture and do it their own way. Like THE SIMPSONS and SATURDAY NIGHT LIVE, it’s become an institution. And while the former shows eventually got a lot softer as they aged, SOUTH PARK still pushes boundaries like no other long-running TV series.

Here’s to a solid Season 17 and to a very promising Season 18.