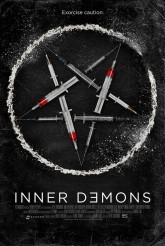 While INNER DEMONS isn’t particularly innovative, it is at least a lot more coherent and thought-out than many in the found-footage horror genre. The acting is good, the progression works, and while the premise has been done before – is the main character addicted, psychotic or actually possessed? – it is handled here with verisimilitude.

The premise is that a reality TV show called “Step Inside Addiction” is documenting what is meant to be the intervention and treatment of Carson Morris (Lara Vosburgh). Carson, we are told by her parents Steve (Christopher Parker) and Beth (Colleen McGrann), was formerly a gifted student who was accepted into a prestigious high school. Unfortunately, Carson’s efforts to fit in seem to have led her to drug addiction.

Carson, although she’s going through a Goth phase, doesn’t seem like the typical rebellious teen. When pressed for explanations, she insists that there is something evil inside her and that hard drugs are the only way she can suppress it. When she’s told that this is a common belief among addicts, Carson consents to go to a treatment facility, where she can get clean. The “Step Inside Addiction” team is there every step of the way to record what happens.

This is in fact the main glitch here. The documentary crew’s cameras pick up such strange things when no one is around that we wonder why they’re not looking at and reacting to their own footage. This also tips things early, since we are shown beyond a narrative doubt what’s actually going on here, even though alternative theories continue to be put forward.

On the plus side, the screenplay by Glenn Gers puts forth a reasonable (within genre logic) explanation as to why this is happening to Carson specifically. Director Seth Grossman gets good, proportionate performances from his cast. Vosburgh does an especially good job of delineating Carson’s various states, from shy and resigned to medicated to feral.

While there aren’t a plethora of huge scares and the build takes longer than some fans may like, INNER DEMONS progresses steadily to several surprises in the finale. It’s made by people who know what they’re doing, understand what they’re making and accomplish their goals without pretension, fuss or absurdity.