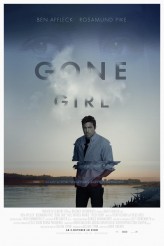 GONE GIRL achieves something rather unusual – it keeps us engaged and eager to know what will happen next, even as we’re not sure that we like the people who are most affected by the story’s events.

Based on Gillian Flynn’s best-selling novel, with a screenplay by Flynn that’s directed by David Fincher, GONE GIRL takes turns in showing us several sides of a story. There’s Nick Dunne (Ben Affleck), who begins the film by telling us in voiceover that he’s like to break his wife’s skull open so that he could know what she’s thinking and feeling. Then there’s Amy Dunne (Rosamund Pike), Nick’s wife, who narrates through diary entries that predate the beginning of the story proper.

In the present, Nick drops by the bar he owns with his sister Margo (Carrie Coon) in a Missouri town not far from St. Louis. The adult siblings banter and then Nick returns to the home he shares with Amy. She’s not there and the glass coffee table is shattered. Nick calls the police and reports that Amy is missing.

Flashbacks show us Nick and Amy in happier times, when he was inventive in his courtship and proposal, and she adored him. After five years of marriage, financial difficulties and a move to Missouri (he went home to take care of his dying mother and they stayed in her house), both of them seem to be full of resentment toward one another.

The police take Nick seriously from the outset because of the signs of violence within the home. The film and its storytelling provide us with conflicting clues. Amy has two ex-boyfriends, one (Scoot McNairy) who had some sort of legal judgment against him and one (Neil Patrick Harris) who reportedly stalked her since their high school days. Could one of them have done something? Or could it be sulky, secretive Nick?

The answer is, to put it mildly, quite a twist. Now we’re following two different threads, the investigation into what’s happened and the upshot of the twist. Then there are two more big twists, the last of which makes it hard to accept the facts of the movie’s finale, much less what it seems to want us to contemplate.

For most of its running time, GONE GIRL is genuinely engrossing as we wonder what’s going to happen next and find that we enjoy being had, over and over, by the filmmakers. The movie also has a lot to say, in entertaining form, about entertainment posing as news and commentators who try cases on their shows without knowing anything about the facts. It also has some strong opinions on the state and nature of marriage as institution, social convention and agreement between two individuals. We are turned this way and that, and just when we start to think we understand what’s really happening, some new reversal is provided. Flynn is brilliant at construction and Fincher excels at misdirection and revelation.

Speaking of revelations, leading lady Pike is likely to catapult to stardom on the strength of her work here, which is terrific. Affleck is unafraid to play glib and self-centered. Coon provides us with a likable true north. Tyler Perry is swell and very funny as a defense attorney and Kim Dickens and Patrick Fugit banter credibly and enjoyably as the two local cops on the case.

It’s impossible to explain the film’s problems – if they can even be described as such – without giving too much away. Suffice to say that there’s a tonal shift and then some assertions about a particular character’s choices that probably worked better in the novel, where there’s more room to set such things up, than on screen.

Even so, this is impressive storytelling, expertly made. Whether one comes away satisfied or soured, GONE GIRL is one of those films that is required viewing for those eager to keep up with the cultural conversation.