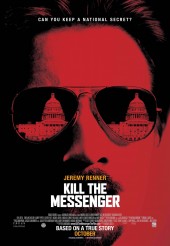 At this relatively late date of 2014, most people accept as a matter of historical record that the CIA was involved in some shady doings in Nicaragua during the 1980s, continuing into the following decade. However, in 1996, not only was this news, it was downright incendiary. The story was broken by Gary Webb, a writer for the San Jose Mercury News. He wrote a series of articles about the matter, and then a book on the same subject, entitled DARK ALLIANCE. His fellow journalist Nick Schou wrote a book about what happened to Webb as a result of his pursuit of the story, entitled KILL THE MESSENGER.

In the film KILL THE MESSENGER, written by Peter Landesman (who also has a background as a journalist) and directed by Michael Cuesta, Gary (Jeremy Renner) more or less stumbles onto the CIA/Contra story while he’s covering government seizures of houses belonging to accused drug dealers, with the dwellings not returned to their owners even where there’s no court case or the suspects are found not guilty. A shrewd ploy on the part of a beautiful woman (Paz Vega) and a mistakenly liberated court transcript send Gary hurtling onto the most dramatic story of his career. He’s thrilled to be writing about something so important and, after some fear, his editor (Mary Elizabeth Winstead) and publisher (Oliver Platt) are excited by all the attention their publication is getting. However, the CIA doesn’t like this kind of publicity, and the Agency has ways of pushing back.

KILL THE MESSENGER is not in the least an action thriller. It looks like it wants to work as both a political/psychological thriller and a character study, but it often gets bogged down under its own weight. Even though there is a clear chain of events, it often feels like we’re going back and forth over the same issues as Gary repeatedly verbally wrestles with his sources and his bosses. There are some wonderful scenes, including several with Michael Sheen as a government man who tries to warn Gary off of his course, but some are a little overdone.

As for the character study aspect, Renner is a terrific actor who gives a deeply felt performance, providing every nuance without ever overdoing it. However, the script doesn’t tell us much we don’t already know about people whose work and principles bring them into collision with authority, sometimes at the cost of spending much-needed time with family. It’s a valid story but a familiar one.

The public reaction to Gary’s articles was unexpected, especially how the information was interpreted in certain areas. This is an especially intriguing part of the story, but while KILL THE MESSENGER shows us these events, they don’t feel connected to the larger story.

KILL THE MESSENGER is worth seeing for Renner’s work and for the information it provides about its time and its subject. Mainly, it will whet appetites for the books it’s based on, which promise to be fuller experiences.