One of Capaldi's BEST episodes yet! 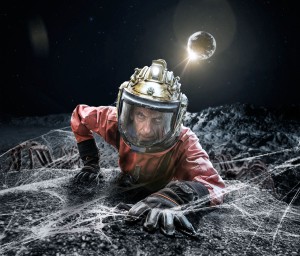 The Doctor (Peter Capaldi) and Clara (Jenna Coleman) find themselves with student Courtney Woods (Ellis George) on a trip to the moon in this week’s new DOCTOR WHO episode “Kill the Moon.” Once there they are of course drawn into a conundrum with spider-like creatures that effectively kill anything they see and an enormous mystery involving the moon itself, and why it suddenly has gravity and is wreaking havoc on Earth as a result.

The Doctor is extremely gruff and detached for parts of the introduction to this episode; in fact the whole reason they make the trip to the moon is to show Courtney just how special The Doctor actually thinks she is; after being completely dismissive of her in the last episode.

“Kill the Moon” has one of my favorite 12th Doctor moments thus far for the season, and it’s not actually his big humanity speech towards the end where he effectively removes himself from the equation of the problem at hand. No, actually the moment that I love is him producing his yo-yo to demonstrate to all in attendance that there is gravity on the moon, a phenomenon that should not be happening.  It’s just a simple and fun couple of minutes in the episode, but it brings back a touch of the wackiness we had with the 11th Doctor (Matt Smith) and really smacks of the 4th Doctor (Tom Baker) era as well.

This episode takes a dark turn (yes darker than people being devoured by spider-critters on the moon) when Clara and Courtney have to help decide whether or not to kill a gestating infant inside the moon to save the Earth or to let it live and see what happens. The tone of this episode feels a lot like “The Beast Below” from Series 5. Once you know that humanity is faced with a choice between themselves and an inconceivably huge alien life form, it becomes a question of what is the right choice to make. Amy Pond (Karen Gillan) let the Doctor down by choosing to forget the truth about the Star Whale that was underneath the starship Britain. This time around however Clara makes the right choice (though she very nearly doesn’t) and everything turns out to the good, with a really beautifully rendered hatching scene.

At the end of the episode, however she completely loses her mind on The Doctor. It’s warranted, but she should know from traveling with him for several years, and having seen the best and the worst of him in various incarnations that it shouldn’t come as a surprise that he relies on his companions to make the tough choices some of the time. It’s not really a test, but The Doctor can’t be expected to save the day every single time. So while I do understand where her anger is coming from; I kind of just don’t care and want her to go away. Then of course my least favorite love interest Danny Pink (Sam Anderson) shows up and makes a half-assed attempt at making it all OK.

Courtney is also not a huge favorite. She’s not a terrible character, but she really is just a mouthy annoying kid, and I’m hoping this is the end of her journeys in the TARDIS. She doesn’t really add anything to the story and she just kind of bugs me. She feels a bit like a dislocated SARAH JANE ADVENTURES character instead of a regular on WHO. She’s well Chav, but she doesn’t have the charm of past Chav characters like Rose (Billie Piper) and Jackie Tyler (Camille Coduri).

So let me clarify. When I said this is one of the best episodes for the 12th Doctor so far, it is. Simply looking at him as a character, and the complexities that he goes through in this episode; once again Capaldi hits it out of the park. The companion interaction while having moments that irritated is still one of the better lessons to be learned from traveling with the Timelord.

I guess everything works out for the moment for The Doctor and Clara, since she is back with him for the orient express episode with a killer mummy next week. But, past this meltdown between them, it really feels like Clara’s days in the TARDIS are running out.