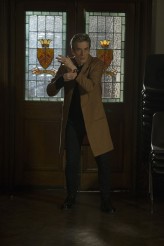 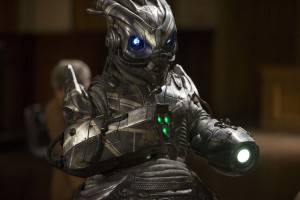 For having The Doctor (Peter Capaldi) and Clara (Jenna Coleman) working to capture an alien inside of a school full of children, there is a surprising lack of any kind of casualties on DOCTOR WHO this week.  “The Caretaker” proves that The Doctor can go undercover (sort of) and manage to make it out with all of the kids and teachers intact; unlike last time in Series 2 “School Reunion” where an undisclosed amount of staff and students got eaten up by the Krillitane.

And when I say that Clara was assisting in the capture of a critter called a Skovox Blitzer; I mean that she ends up press ganged into it in order to prevent anyone from being harmed, which seems honestly to be one of the last things on The Doctor’s mind.

“The Caretaker” has some wonderfully charming moments with the 12th Doctor, and once again I find myself completely loving Peter Capaldi in his version of our favorite Timelord. This Doctor is certainly more severe, and has little time or patience for any kind of small irritations (like people), and he tends to be more alien and less “human” but I feel that all of that makes him more The Doctor than a lot of Doctors that we’ve had in the past.

This episode was largely about Clara and how she balances her life with The Doctor, and her personal life of teaching and trying to date Danny Pink (Samuel Anderson). I have absolutely no problem with an episode focusing on Clara’s life, as there have been many in the past Series focusing on companions when they aren’t with The Doctor, but I really am finding it hard to like Danny Pink. They just haven’t given us enough about him yet to really like. We have the bits and pieces from previous episodes about his childhood and his soldiering past, but we really still know very little about him. He just seems like a somewhat unsympathetic character and the only other male companion that we’ve had recently to compare him to is Rory Williams (Arthur Darvill) and let’s face it, he’s no Rory.

Also, can we talk about his weird Spider-man leap over the Skovox Blitzer to save the day? Where the Hell did he learn to do that? Was he a soldier for S.H.I.E.L.D. or something? I can’t imagine that many soldiers are able to perform such acrobatic feats just from basic training and from being in the field.

The Skovox Blitzer is a nifty critter and just screams TOY LINE. It looks like a robotic owl on spider-like legs and it just is really fun to watch scamper around on screen. I have to say it’s probably one of my favorite new aliens for this Season.

This episode also has one moment of absolute heartache, where The Doctor mistakenly thinks that Clara’s boyfriend is someone who happens to look a startling amount like his 11th persona. There’s a really awkward/heartbreaking moment where he sees who he assumes she is dating and makes the decision to let her go. It’s really a beautiful moment performed by Capaldi, and you completely believe that he WAS the man that used to have 11’s face. It’s moments like that where you really get sucked into WHO and the mythos and history of The Doctor, and what being a 2,000+ year Timelord would actually mean.

We get some more mysterious looks at the Nethersphere in this episode and a brief glimpse of the illusive Missy (Michelle Gomez). This time the Neterhsphere or “Promised Land” looks like a processing HR department of a large corporation. So what exactly is it, and where is all this going?

Up next giant spiders! Do we think this will tie into the 3rdDoctor’s adventures? Keeping in mind that adventure involving giant spiders was the one that finished him off? Who knows. Who knows.