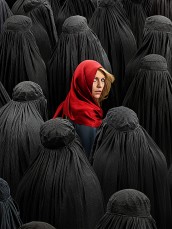 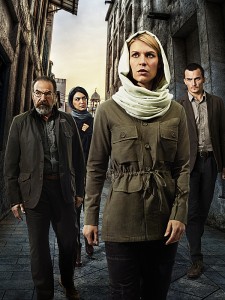 Showtime’s Emmy-winning drama HOMELAND returns for its fourth season Sunday, October 5, at 9 PM with a double episode (the series airs thereafter in one-hour installments at 9 PM). Our heroine Carrie Mathison, played by Claire Danes, who won two consecutive Emmys in the role, is now CIA station chief in Kabul, Afghanistan. Carrie is still mourning the death of Nicholas Brody (Damian Lewis) and has left their infant daughter with her sister back in the U.S. Events soon lead Carrie to Pakistan. Peter Quinn (Rupert Friend) is still working with Carrie and Carrie’s erstwhile mentor Saul (Mandy Patinkin), although now no longer with the CIA, also re-enters the picture.

HOMELAND executive producer/show runner Alex Gansa, who co-created the series with Howard Gordon based on Gideon Raff’s Israeli P.O.W. drama HATUFIM, is at a session Showtime holds for the Television Critics Association. When the formal Q&A finishes, Gansa withstands a little follow-up interrogation.

ASSIGNMENT X: Does not having Brody and the Carrie/Brody relationship free you up to do a different kind of storytelling that you’ve been hoping to do with HOMELAND?

ALEX GANSA: Absolutely. The show is no longer about the push and pull of those two characters. I think Brody’s presence in Season 4 is quite strong in terms of the specter of him and the grief that Carrie is living through, but it definitely allows us to do all the things that we wanted to do [in terms of showing] what an intelligence officer does – recruit assets, break up the host country’s laws and find out secrets.

AX: Within the story, what is the time jump between the end of last season and the beginning of this one?

GANSA: Half a year.

AX: Did you ever consider bringing in an actor of Damian Lewis’ stature to play a new character to fill the void left by Brody’s death?

GANSA: You know, we obviously talked about that, but I think we’re bringing such a strong ensemble back to Season 4 that we really didn’t need to do that. Also, we have Rupert Friend, we have the character of Peter Quinn there, who is hovering around the edges of Carrie and I think waiting to see when Carrie might be emotionally available for a relationship of some kind. Carrie has a process of grief to go through first before she can go through something like that, so we’re working on it.

AX: So should we look for some kind of romantic element?

GANSA: Everybody wants to see that stuff and it’s going to be there.

AX: Will Carrie have another “weekend?”

GANSA: [laughs] You just might be in for one this season.

AX: Given how much HOMELAND centers on what’s happening in the Middle East, can you tell us what went through your mind when the most recent real-life conflict heated up between Israel and Gaza?

GANSA: You know, we spent a lot of time talking about doing the show this season in Israel and really telling the story of Carrie being the station chief in Tel Aviv. And that part of the world is so complicated and so frustrating and so impossible to understand that when you see the events on the ground there, it’s hard to know where to put your head, it’s hard to know what to think, it’s hard to say, “I take the Israeli side” or “I take the Palestinian side.” It is such a thorny, difficult, emotional problem, and that’s really ultimately the reason why we decided not to do it. We couldn’t find any clarity about it, and watching the television, I can’t find any clarity in it either. I was in Israel at Howard [Gordon]’s daughter’s bat mitzvah the last time Israel bombed Gaza, so I’ve been on the ground there when that happens, and it is terrifying. It’s as if there were a war in Orange County [California]. That’s what it feels like.

AX: How did you decide that you would set Season 4 in Afghanistan and Pakistan?

GANSA: It was largely the result of everybody that we talked to, every intelligence officer, every State Department person who said if they could go back into the field right now, that’s where they would want to go.

AX: Can you talk about your research process for Season 4, once you decided where you were going to set it?

GANSA: I think we all could have a master’s degree in Pakistani-United States relations by now. We talked to so many people, we’ve read so many books – we’ve just tried to gain a conversance and an expertise in the short amount of time that we had. The short answer is, we read a lot of books.

AX: Last season, there was a colossal surprise when it turned out that Carrie and Saul had jointly orchestrated her incarceration in the mental hospital. Now, when you’re trying to get the audience to an “Oh, my God” moment of, “We didn’t realize that” and you’re doing purposeful misdirection, how do you handle the fine line between misleading the audience – the audience doesn’t know where it’s going – and the audience going, “There’s something wrong with the storytelling”?

GANSA: Yeah. That was the issue for the first four episodes last season. People were confused rather than intrigued. Or some people were – I know some people who loved it. It was interesting. My background was not film and television. I wanted to be a novelist. So I think of novels and I have a much more sort of literary sensibility, for better or for worse. And most of my literary friends, the people who write novels, they just loved that storyline. A television audience, or some of the television audience, who are used to sort of being ahead of the game in understanding things, felt duped, I guess. They didn’t see it coming.

I find the Internet and online discussions – they are so mean-spirited and snarky, you just can’t go there. I would just go down the rabbit hole into a depression if I spent too much time – our job is to kill ourselves to tell the best story we can possibly tell. And if you’re second-guessing how the audience is responding, you’ve already lost.

AX: It seems like the HOMELAND company was on board with it …

GANSA: Let me tell you something – if there was one fan of last season bigger than any other, it was Claire Danes.

GANSA: I just don’t know the answer to it yet. I think we will come back to America at some point.

AX: Is there anything else we should know about HOMELAND right now?

GANSA: I can’t tell you.