The actor talks his Emmy nomination and kicking in doors 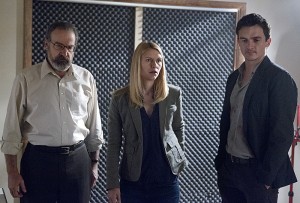 In the universe of HOMELAND, now in its third season on Showtime, Sundays at 9 PM, almost everyone has a secret agenda. We still don’t know whether this is true of CIA assassin Peter Quinn, played by Rupert Friend. What we do know is that Quinn is willing to go against orders when he believes they’re wrong, willing to threaten a superior who he believe is acting from pride rather than national protection, and that he’s willing to shoot to wound friend Carrie Mathison (Claire Danes) when he thinks she’s jeopardizing a mission.

Friend, born in Oxfordshire, England, earned an Emmy nomination for his recurring performance as Quinn last year; this year, he’s been upgraded to a HOMELAND series regular. The actor, whose credits include playing Prince Albert in YOUNG VICTORIA and Mr. Wickham in the 2005 film version of PRIDE AND PREJUDICE, is at both a Q&A session and an evening party held by CBS/Showtime for the Television Critics Association. Friend is amenable and has a great deadpan in talking about CIA Agent Quinn – though he doesn’t tell us so much that he’ll have to kill us.

ASSIGNMENT X: Were you a fan of the first season of HOMELAND, before you became part of the cast?

RUPERT FRIEND: Yes, very much so. It was the only show I watched.

AX: What drew you to HOMELAND particularly?

FRIEND: I just thought that the writing was unpatronizing. I thought it flattered the audience’s intelligence in a way that pleased me, and the characters were genuinely three-dimensional, and that’s so rare.

AX: When you were cast as Peter Quinn, did you expect the role to last as long or be as integral as it’s become?

FRIEND: I had no idea, to be honest. I got the role – I had to take one scene – I hadn’t got any scripts and had no sense of the arc of the character whatsoever. So for all I knew, it was a one-scene job. I didn’t know whether it was one scene, one episode, one week or what. So it’s been an unfolding series of delightful surprises.

FRIEND: I just made it up [laughs].

AX: Was there anything you had to learn how to do for this part, like kick in a door or shoot a gun or …?

FRIEND: No, I do most of those things in my daily life. I don’t like opening doors – I tend to kick them down.

AX: You must have a fun daily life and a lot of shredded boots.

FRIEND: That’s exactly it. And a big bill in doors from my local carpenter.

AX: When you’re grappling, sometimes literally, with Claire Danes, where Carrie is in one of her manic phases, is that difficult? Do you both just go for it, or is that very carefully choreographed?

FRIEND: We pretty much go for it. The whole show is done very much on instinct, for me, and we don’t really rehearse things overly, or have very many takes. It’s pretty much turn up and go.

AX: How would you describe the relationship between Carrie Mathison and Peter Quinn?

FRIEND: I think there’s a mutual respect for someone who takes personal risks for their job. I think they are both kind of edgy people. They both have a huge propensity to go to extremes in order to get the work done and potentially at great risk to themselves, and that’s something that is definitely explored further in Season 3.

AX: Where would you say Quinn’s loyalties lie this season?

FRIEND: I would say his loyalties this season are to his own moral compass, rather than to an ulterior motive or higher power.

AX: How much of a surprise was the Emmy nomination for playing Quinn, versus how surprised were you to find that Quinn accidentally shoots a child in the first episode of Season 3?

FRIEND: You actually want me to compare those two things?

FRIEND: One of them is brilliant.

AX: I was just asking about the relative size of the surprise.

FRIEND: The size of the surprise was huge. To be completely honest, I didn’t even know they [the Emmy nominations] were announced, and so my agent phoned and said, “You’ve been nominated for an Emmy.” And then he said, “I’m so sorry, man. It’s really early. I mean, you’ve all been nominated.” And then he phoned back and went, “I’m really sorry. It’s really early. You have actually been nominated.” So I sort of did this [he mimes trying to track the changes in information], but it was great. It was a real surprise. I didn’t know I was a guest star, either. I didn’t know that, so now I do. A welcome guest.

AX: Did you have to psych yourself up for the scene where Quinn finds the little boy’s body on the floor?

FRIEND: I mean, I think if you shot a child, even if it was pretend, and then saw their dead body on the floor, the work’s done for you. There isn’t anybody who wouldn’t [react].

FRIEND: Yes, I just completed a film called STARRED UP, which is directed by David McKenzie. It [premiered] at the Toronto Film Festival, and at Telluride. It stars Jack O’Connell, who’s playing the lead in Angelina Jolie’s new film [that she’s directing, UNBROKEN], about Louis Zamperini. Amazing story. Anyway, that’s my buddy, Jack O’Connell, and I had the privilege to work with him in STARRED UP and we’re very excited about it. It’s about a very violent juvenile who’s transferred to an adult prison where he meets his father, who is also an incredibly violent prisoner in a father/son story.

AX: And is there anything you’d like to say about HOMELAND or your role on it?

FRIEND: Anything could happen.