How accurate it the recreated TARDIS anyways? 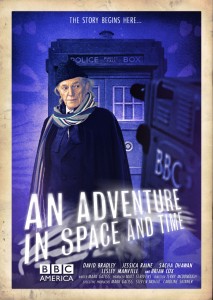 AN ADVENTURE IN SPACE AND TIME | ©2013 BBCAmerica

Director Terry McDonough is the lucky man who was given the somewhat unenviable task of bringing the world of 1960’s BBC and the world of the first incarnation of DOCTOR WHO to life for the new TV movie AN ADVENTURE IN SPACE AND TIME. McDonough is a WHO fan himself, and he took a few minutes to give ASSIGNMENT X a taste of what went into creating that time period and that specific world for today’s audiences.

ASSIGNMENT X: Can you talk about the process you went through to re-create the TARDIS and the Daleks on a limited budget?

TERRY MCDONOUGH: We had a minimal budget but we had a great source of information available to us with the past history of the episodes, that Dave Arrowsmith our designer who has done such a great job, made ten pounds look like a hundred pounds on screen each and every shot. He commissioned four Daleks to be made by a Dalek fanatic in Scotland, one of the original directors of DOCTOR WHO gave us the floor plans for the interior of the TARDIS and then from those floorplans Dave again re-created the original TARDIS down to the square centimeter to perfection. Exactly as it should be. It was like a DOCTOR WHO fan’s dream to walk around in the original TARDIS.

AX: So did all of these amazing things end up at the “Doctor Who Experience” in Cardiff?

MCDONOUGH: Yeah obviously it was a BBC Wales, BBC America, and BBC Worldwide which we are very grateful for.  Then the “Doctor Who Experience” bought them and installed them in the exhibit so that people can go and walk through them. It’s installed now and it’s there.

AX: You cover from the creation of DOCTOR WHO to the regeneration into the Second Doctor. Did you touch on Hartnell’s return for “The Three Doctors?”

MCDONOUGH: No. The film is mainly about the accident that made DOCTOR WHO, out of a need to fill a time slot on a Saturday and make it work. It’s not just a film about DOCTOR WHO, it’s a film about television history and hopefully that will appeal to a large audience, as well.