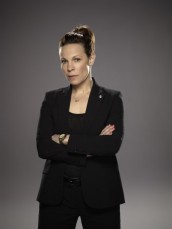 The actress also talks about THE CONJURING 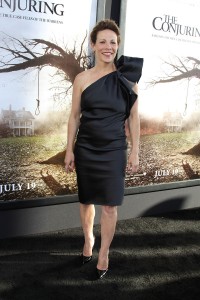 Lili Taylor at the premiere of THE CONJURING | ©2013 Sue Schneider

In the future according to ALMOST HUMAN, on Fox Mondays at 8 PM, every police officer will have an android partner. Detective John Kennex (Karl Urban) is different in that his new partner Dorian (Michael Ealy) is an android who has feelings.

Presiding over their precinct is Captain Sandra Maldonado, played by Lili Taylor. This has been a busy year for the Illinois-born actress, who also played a possessed mother of five in the summer feature hit THE CONJURING and Gypsy matriarch Lynda Rumancek on the Netflix original series HEMLOCK GROVE. Taylor has been nominated for two Guest Actress Emmys – one for SIX FEET UNDER and another for THE X-FILES. Taylor’s first big film role was in MYSTIC PIZZA. Since then, other major gigs have included SAY ANYTHING, BORN ON THE FOURTH OF JULY, THE ADDICTION and playing would-be assassin Valerie Solanas in I SHOT ANDY WARHOL

At a party thrown by Fox in the sky-high Soho House for the Television Critics Association, Taylor enjoys the view of L.A.’s twinkling lights below as she talks about playing Captain Maldonado on ALMOST HUMAN.

ASSIGNMENT X: You’re often cast as a sort of loner or frail person. How does it feel to be playing somebody who’s in charge of an entire police precinct?

LILI TAYLOR: I like it. I’ve never been a cop. I don’t think of myself as playing “frail.” I mean, I guess Valerie Solanas was a loner, but she wasn’t any pushover, right? But I love being in a position of power. It’s great.

AX: In THE CONJURING, you’re playing somebody who has a husband and five daughters who are listening to you –

TAYLOR: And I’m possessed and trying to kill people.

AX: So are many mothers at some point …

AX: But is Sandra Maldonado one of the few roles you’ve had where you’re saying, “Okay, everybody, I’m here, you will listen to me”?

TAYLOR: Yeah. I love it. It’s fantastic. And being a woman who’s in that position of power is really, really nice.

AX: In the universe of ALMOST HUMAN, is gender equality pretty much the norm, or is it still an issue?

TAYLOR: Well, I’m going to make it [the norm]. Because for me to be in this position as a captain, obviously it’s not easy for a female. So I was wondering, maybe through necessity, if they’ve had to allow more women into the workforce or whatever.

AX: Did you do or learn anything to prepare for playing a police captain?

TAYLOR: Yeah. I did three days of gun work, which was great, and then I watched a lot of LETHAL WEAPONs, which are so fun, actually, and PRIME SUSPECT, with Helen Mirren. THE SILENCE OF THE LAMBS, I love what Jodie Foster was doing. I think [Maldonado is] similar to that character Clarice in that I think Maldonado’s father was on the force and she’s following in his footsteps.

AX: How would you describe Maldonado’s relationship with Detective Kennex?

TAYLOR: I see them as brother and sister in a way. I don’t know if I’m an older sister or younger sister. At first, I thought older, and then someone said I was actually a younger sister. But I feel like, I am the boss, but I value his opinion so much that he can come in – for instance, we just did a scene where he basically usurped my power. He said, “This interrogation is off. This guy is out of here.” And I had to ask myself, “How much [leeway] is she giving him?” I think she’s giving him a lot – if it was really important, she’d say, “I got this. I’m the boss. Out. But pretty much, ninety-nine percent of the time, he’s so special in his ability to assess the situation and think outside the box that she’d be a fool not to take in his insight.

TAYLOR: I feel like I can understand Kennex’s point of view. I don’t love it either, but I’m more practical, like, if this is the way it’s going, we’ve got to adapt, this is the way it is. But no, I don’t think I’d prefer to have an MX [the unemotional android].

AX: Do you know if, as the show proceeds, Maldonado gets any more of a relationship with Michael Ealy’s android character Dorian, or does she continue to regard him as being useful equipment, like a police car?

TAYLOR: Well, I think it’s more about Kennex, that I’m giving Kennex something that’s going to help him. As opposed to I’m not doing it for Dorian, but I think I really appreciate Dorian. And I’m happy to be able to put him somewhere.

AX: Your character in THE CONJURING, Carolyn Perron, is a real person. Did you get to meet her or any of her family while you were working on the film?

TAYLOR: I didn’t. It just didn’t feel right. I met them at the premiere and that felt like the right time to meet them, but prior to that, one day they came to set and I was in possession [makeup] and with what they had gone through, I just felt like, they’d had enough.

TAYLOR: That’s harder, certainly. It takes more concentration – well, they both take concentration, but the possession stuff’s almost more like a physical marathon – it’s a different sort of mentality. Being scared is being in this tension. It’s just harder.

AX: Did THE CONJURING come out the way you hoped?

AX: You do a lot of work that’s not in the genre – playing Valerie Solanas, for example – but you also do a fair amount of work that is in the genre. You just did THE CONJURING, you did THE HAUNTING awhile back, you did HEMLOCK GROVE, now you’re in ALMOST HUMAN. Is this a genre that you like as a viewer?

TAYLOR: I love horror, like classic horror, and I love psychological horror. I haven’t always been into sci-fi. But I loved CHILDREN OF MEN – I love sci-fi when it’s a little bit closer to now. When it’s so far away, sometimes it’s just a little hard for me to wrap my head around.

AX: Do you feel like ALMOST HUMAN is close enough to now?