While PRINGLES remains one of the most addictive canned crisps around, the company is always reinventing the brand with new flavors and special limited edition flavors.

While we didn’t get a chance to sample these chips last year, we did check out the one mainstay from last year CINNAMON & SUGAR (which is joined this year by limited edition PECAN PIE and WHITE CHOCOLATE flavors). 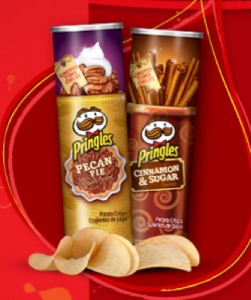 When you see the words “Cinnamon & Sugar”, you expect these crisps to be doused in that flavor. The company has no problem smothering their crisps with Barbeque and Sour Cream & Onion flavoring, so why not here?

The ratio of salty to sweet to completely imbalanced. There’s barely a whiff of Cinnamon & Sugar in the can we tested. This thing could have been comparable to the excellent Cinnamon Twists Taco Bell sells – something that has a hint of salt, but tastes addictively sweet by all that sugar and cinnamon that’s tossed on it.

It’s as if Pringles wanted this limited edition treat to remain more of a potato crisp and less of a dessert chip. If you’re going to go the extra mile to break the rules with your product, give in fully. Not only will it please people with sweet tooths, but you also might have a very successful crisp people will want to try again and again, year after year.

To be fair, we haven’t checked out the PECAN PIE or WHITE CHOCOLATE flavorings, so we won’t be able to confirm if the same flavor skimpiness is also prevalent there, but I would say, if the CINNAMON & SUGAR were a home run, it would have made taste testing their other flavors a no brainer.