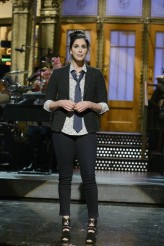 Getting better, but not quite ready for late night just yet 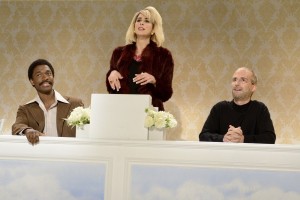 Nobody is rooting more for SATURDAY NIGHT LIVE than I am. As overly critical as I can be over the show and its occasional lack of focus and a good portion of the new cast still not ready for primetime and far from being ready for late night I still have faith. It’s the 40th Season and whenever there’s an anniversary, executive producer Lorne Michaels brings out the big guns to make the best impression.

This week, former cast member Sarah Silverman hosts – 20 years after she was fired after one uneventful season a writer and featured performer. She’s since gone on to find her voice and become the comedienne she wasn’t ready to be when she was on SNL. Now she gets a chance to right the wrong and the results are far more consistent than last week with Chris Pratt hosting.

Silverman has a very specific style – she’s not a “character” person. She’s more of a person who elicits reactions or reacts herself. There isn’t a lot of role-playing, though she does a delicious Joan Rivers in a sketch where she ends up in heaven at a roast. She flubbed some lines here and there, but overall, one of the better impersonations the show has had in some time. The sketch itself was strange, but not laugh out loud funny – no doubt due to the fact they included such oddball dead people like Benjamin Franklin (Bobby Moynihan) to Richard Pryor (Jay Pharoah) to Freddie Mercury (played by Maroon 5 frontman Adam Levine) at the roast.

The show kicked off with another epic failure of a political sketch. This time it was a 60 Minutes parody as Barack Obama (Pharoah) was being interviews. Like last week’s sketch, it was destroyed by Pharoah’s inability to find the funny. . There was nothing funny in the delivery or the material where he plays Obama completely straight as an arrow and it sat there like, well, an interview with Obama on 60 MINUTES. What happened to the biting social commentary and wit that used to earmark a great SNL political skit? Completely toothless.

Things improved pretty quickly with the monologue, with a clever moment where Sarah Silverman took questions from the audience – and those questiones were from herself in the SNL audience when she was a cast member 20 years earlier. Super clever, and actually a great way to address Silverman’s short stint on the show.

The filmed bits proved to be better than the live sketches at times. There was a movie parody for a sequel to THE FAULT IN OUR STARS (dealing with Ebola) and a commercial championing WHITES enjoying a few more years in the majority. This is the kind of biting satire the rest of the show should be going after. 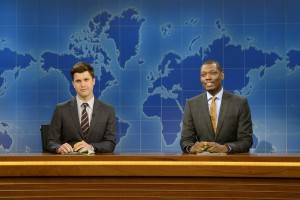 WHITES is also notable in that former featured player from last season Mike O’Brian also appeared in the filmed bit. He was unceremoniously demoted back to the writer’s room after last year’s stint as a featured player, but I have to say, he’s sorely missed. He was different, unique and stood out among the other whitebred new cast members. His quirkiness was an asset and it’s a shame he didn’t get an extra year to prove himself.

One of the worst sketches was a retrospective TV show looking back at failed TV series, one of which was a soap opera where women weren’t backbiting, two-paced back-stabbers, but loved each other and were compassionate. You can see what they were trying to do, but it didn’t hold up very well.

The best sketch of the night had Silverman being picked up from the airport and tells her friend that she slept around in Amsterdam only to have a very funny  Moynihan pop up with a ring in the backseat to propose and ultimately being really pissed. Moynihan (like Taran Killam and Kate McKinnon) is under-utilized, and he’s learned how to save a sketch with very little to work with. The sketch gets even more bizarre as Silverman’s parents show up and then Adam Levine. This is the kind of sketch that SNL doesn’t do enough of. It had a beginning, middle and an end and worked perfectly.

There were a couple other so-so moments. Silverman, Cecily Strong and Sasheer Zamata play Tina Turner lookalikes on a River Boat show and explain how they got sucked into working on the River Boat. A funny idea, just not enough weirdness to truly set it over the top. McKinnon should have been one of the three – she would have saved the sketch.

Finally, there’s Weekend Update, which I have to say is getting much better. This is the first time I saw Colin Jost loosen up and have some kind of on screen camaraderie (it was missing last year with Strong). If the show breaks from the traditional news format and amps up the interplay between Jost and Che, we might have something here. Che also seemed much more relaxed and when he had a chance to talk more in detail on a new topic as opposed to a quick throwaway joke, he really came to life. This may be the future of WEEKEND UPDATE, cribbing a bit from THE DAILY SHOW were the anchor riffs a little bit longer on a topic instead of rattling off random gags.

Strangely, Pete Davidson was suspiciously absent this week, despite a knock-out debut during the premiere and Aidy Bryant was sidelined, albeit one brief appearance (could this be punishment for her incessant flubbing last week?”)

I see promise in this new cast and the writing. It’s not perfect yet, it’s not great, but if the show can find the right mix of this very big cast and allow everyone to shine, the 40th Season could very well gel into something fantastic. It’s a lot to hope for, but Michaels has done it many times before and he will definitely do it again.

Next week is the return of Bill Hader and frankly, it’s what the doctor ordered for the show.