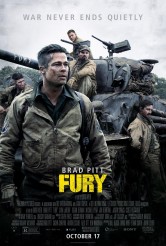 FURY is set in April 1945, when the Allies were winning the war in Europe, but the Nazis were still fighting back furiously. The film takes its title from the nickname of a stalwart tank. A valued crew member has just been lost and is being mourned in various ways by his fellows: the tank’s top officer Sgt. Collier (Brad Pitt), religious Boyd Swan (Shia LaBeouf), affable Gordo (Michael Pena) and thuggish Travis (Jon Bernthal). Young Norman Ellison (Logan Lerman), fresh from the typing pool, is sent to replace Fury’s dead assistant driver. The experienced soldiers are appalled, but Collier steels himself to the task of breaking in the newcomer in the midst of heavy warfare. As the division keeps losing tanks to the better-armored German machines, Collier and his men are sent to head off a Nazi platoon bearing down on an Allied supply and medical unit.

The plot of writer/director David Ayer’s film is as uncomplicated as the above synopsis suggests. The value of FURY is not in surprise, but rather in Ayer’s urgent desire to make us feel what it was like to be caught up in the realities of war in that time and place. There is good character study work with Collier, Norman and Swan – the script gives us less insight into Gordo and Travis, though Pena and Bernthal are absolutely solid – and the cumulative sense of stress, paranoia and exhaustion reaches us. We may not get muddied, bloodied, burned and shot, but we have a visceral experience of it all the same.

Ayer, Lerman and Pitt do a particularly effective job of showing us how Norman’s idealism is subsumed by pressure from both his comrades and the situation. We feel for this boy who doesn’t want to kill and we feel for his commanding officer, who knows that the survival of the unit depends on Norman changing as swiftly as possible. LaBeouf is fine as a man of God who has squared his beliefs with his situation and the less-devout mindsets of his comrades, and Jason Isaacs shows up in a small but vivid role as a harried commander.

There is one sequence that goes so against human logic and how we’re asked to respond to it that it requires some discussion. When Collier and Norman discover two young female German townsfolk hiding in an apartment (Anamaria Rinca, Alicia von Rittberg), Collier determines that Norman should lose his virginity with the younger of the women. Emma (von Rittberg) seems virginal, yet perfectly happy to go into the bedroom with an enemy soldier, even though moments earlier she was hiding under the bed to avoid detection. Would a commanding officer try to get a younger soldier to lose his virginity before possibly dying? Would this really be anything short of coercion for the young woman in question? If it could be, that’s not made plausible here. Ayer sensibly doesn’t ask the audience to condone rape, but what we get instead rings false.

This aside, FURY gathers in intensity and force. War is hell may not be a new message, but it’s one worth repeating and Ayer states it powerfully here.