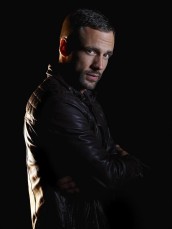 The new series regular talks working on the ABC series 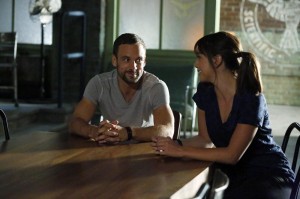 Actor Nick Blood has joined the regular cast of ABC’S MARVEL’S AGENTS OF SHIELD in its second season, Tuesdays at 9 PM, as mercenary turned special agent Lance Hunter. The London-born Blood was recently seen on U.S. TV screens in the PBS airings of THE BLETCHLEY CIRCLE and last year appeared on stage in Los Angeles.

When ABC and Disney have a press event for the second season premiere of SHIELD, Blood is there, wearing Day-Glo green tennis shoes, which he claims his mother insists he don for safety when he’s on his bike at night. He’s on his own for a few moments, and is happy to discuss his new role.

ASSIGNMENT X: Is your last name Blood spelled the way one would assume?

NICK BLOOD: It is, yeah. It causes a lot of confusion. Most of the time when I’m on the phone, particularly with my English accent over here, people are going, “Blood?” And then they ask me if I’m in the Bloods or the Crips.

BLOOD: Yeah, yeah [laughs]. A lot of people have said that, that perhaps my real name is more Marvel than my Marvel name [Lance Hunter] is.

AX: Did you feel particular superhero-y before getting involved in AGENTS OF SHIELD?

BLOOD: Not in my average daily existence, no. I’m starting to feel more and more superhero-y.

AX: Did you watch the show during the first season?

BLOOD: Yeah. It’s so much fun, and just the scale of it and what they achieved – it’s incredible what that team, cast and crew, do to make that show happen every week. You get an action film every week. It’s amazing.

AX: Do you like the way Lance Hunter is introduced in the second season premiere episode?

BLOOD: Yeah. I think it’s done really cleverly. You start following the story, and you don’t know who’s going to kind of emerge from it safe and sound, so it’s a good intro, and the first two or three episodes, you really start to get to know him a bit more, and he’s a little bit of an ambiguous character, and then all of a sudden, you start to see him placed with a few of the other main characters like Coulson [Clark Gregg] or Skye [Chloe Bennet], and you get to know him a bit better.

AX: When you came in, did you ask the writers/producers if Lance’s loyalties are what they appear to be?

BLOOD: I knew. I kind of knew vaguely where it was going in the first few. But there were a few surprises. When you get the script, you’re, “Hold on a second, what does that mean?”

AX: Lance is a very physically active character. Did you have to learn how to do anything for this part, like how to handle a particular type of gun or how to run up a wall?

BLOOD: Well, I’ve done a fair bit of gun training for previous acting jobs and a bit of stunt work and fight work and everything, but the fight and stunt stuff on this is really on another level and I’ve been doing a lot of training with Matt [Mullins], our stunt choreographer, and doing that every week and choreographing the fights, so yeah, that’s been a real learning curve.

BLOOD: Yes. I worked in L.A. last year at the Ahmanson Theatre, I did a play there, BACKBEAT.

AX: That was a musical about the early days of the Beatles. Who’d you play?

BLOOD: Stu [Sutcliffe]. But I’ve not filmed anything out here [in Los Angeles], so it’s all kind of new and different for me.

AX: Do you think you might get to sing on SHIELD?

AX: Doesn’t Stu sing at all in BACKBEAT?

AX: Joss Whedon is one of the creators/executive producers of AGENTS OF SHIELD. Did you watch a lot of Whedon shows before you became involved with SHIELD?

BLOOD: Well, yeah, but I hadn’t pieced them all together, that he was this guy that has created all these different shows that you like, I hadn’t twigged, “Oh, he did that as well, he did that and he did that.” So now I feel very privileged to be a part of it all.

AX: What would you most like people to know about AGENTS OF SHIELD Season 2?

BLOOD: Not very much at all. I want it to be surprises for everyone.