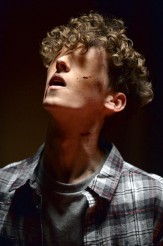 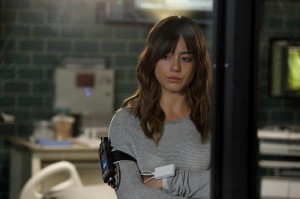 After nearly three months of being hiatus, MARVEL’S AGENTS OF SHIELD has returned and after a great substitute in the form of MARVEL’S AGENT CARTER would the show be able to recapture some of the great storylines it had going when it went off the air last year?

Well, yes and no.

Just to recap what came before, during the course of the events of the first half of the season, S.H.I.E.L.D. had tracked down what appeared to be an alien structure below a city in Puerto Rico that was distinctly tied to the obelisk that Calvin Zabo aka Mr. Hyde (Kyle MacLachlan) had obtained and given to Hydra. We learned that Zabo’s real goal was in the elimination of the man who killed his wife and took her anti-aging abilities and that person was none other than the head of Hydra Whitehall (Reed Diamond). Zabo revealed that Skye (Chloe Bennet) was his daughter and her real name was Daisy (Daisy Johnson that is who in the comics also goes by the moniker Quake for her superpowers to produce earthquakes). Raina (Ruth Negga) took the obelisk and after Skye/Daisy followed her down into a chamber she placed the device inside the chamber. Once the device goes off, Triplett (BJ Britt) was also caught in the room and as a strange mist forms around them Skye/Daisy and Raina are alive but the same black ash kills Triplett. Skye/Daisy lets out a huge quake and shatters Triplett’s body and causes mass damage to the structure.

Picking up after what happened at the end of the mid-season finale, the appropriately titled “Aftershocks” follows the agents mourning the loss of Triplett as well as trying to determine whether Skye/Daisy is actually safe to the world and not transformed into something else like Raina – after she kills a slew of engineers and escapes the chamber in Puerto Rico. Of course, we know Skye/Daisy isn’t alright and soon Fitz (Ian De Caestecker) does as well after reviewing some of the stats on Skye/Daisy during the earthquake that hit the grounds.

Now this is a little bit hard to believe. Sure, Skye is worried about what is happening to her and yes she caused Triplett to get blasted apart but he was dead even before that happened. Given all that she and the team, specifically Coulson (Clark Gregg) have gone through why not just tell the truth about what happened and hope to get help in containing whatever she has become? It doesn’t make sense at this point for Skye to try and bluff her way out of the situation and flat-out lie to her comrades after having them trust her to begin with and then having them fight for her in so many ways throughout the first and second season. Obviously, this makes for good drama or whatever but from logical standpoint it doesn’t make a whole heck of a lot of sense.

For those uninitiated, Fitz gave a bit of the lowdown as to what is happening when he called Skye/Daisy’s condition during the quake “inhuman.” The Inhumans in the Marvel comic universe are a group of super powered people that transform from their current human form to something greater when they get exposed to the Terrigen Mist. The same mist that came out of the obelisk and transformed Raina and Skye. Inhumans are not mutants (such as the X-Men) as they were not born with powers but instead gain them through the mist. In the Marvel Cinematic Universe, it looks like they may be angling for some sort of alien interaction toward the creation of the Inhumans. If you have read about the future movies planned in the Marvel Cinematic Universe, an Inhumans movie is slated to be on the schedule out into the far future.

What is cool about this in terms of AGENTS OF SHIELD is that they are building their own mythology on top of a parallel mythology being set among the movies with maybe future ties between the two being established along the way. They have also created a handful of characters on the show that could have an impact in the movies at some point as well with Quake being a heavy hitter and Mockingbird (Adrianne Palicki) being a historic member of the Avengers in the comics not to mention Agent Coulson already being established very well in the movies (although he died, then was brought back).

Hopefully, the weak storyline in “Aftershocks” will be a launching pad for greater storylines to come in the back half of the season and we’ll get more heavily involved in this whole Inhumans mythology happening. One thing is for sure, in a show that was about superpowered people without any superpowered people at all, they have quickly changed this and we now have a show with a slew of them about – and that is not a bad thing.