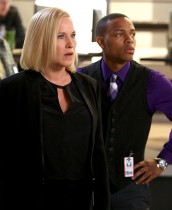 The star and the executive producer talk their new CBS series 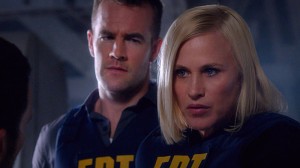 Debuting on Wednesday, March 4 at 10 PM, CSI: CYBER differs from other CSI series in several ways. First, it deals with crimes committed via the Internet, showing scary but fact-based matters like how an in-home baby cam can facilitate a kidnapping. Second, CYBER will delve into the personalities and personal lives of its FBI team from the outset.

Last but not least, CSI: CYBER stars Patricia Arquette – who just won the Supporting Actress Oscar for her work in BOYHOOD – as cyber psychology expert Avery Ryan. Avery, introduced last year in several episodes of the original CSI (now in its fifteenth season), is the team leader and seeks to inspire those around her. At the same time, she is dealing with terrible guilt – she used to be in private practice until a hacker exposed the private files of Avery’s patients, driving one of them to suicide.

Actress Arquette and executive producer Bruckheimer are both at a party thrown by CBS for the press. The two of them decide to provide a joint interview.

JERRY BRUCKHEIMER: We hope so. This is the new edition.

AX: Have the two of you worked together before this?

PATRICIA ARQUETTE: Every actor wants to work with Jerry Bruckheimer.

ARQUETTE: He’s got the golden touch and really great taste, so it’s exciting.

BRUCKHEIMER: Yes. We’ve known each other for quite awhile.

BRUCKHEIMER: I’ve always wanted to work with Patricia. When this came up, it was a perfect opportunity to grab onto her.

ARQUETTE: This material – even though it is CSI, I think it’s going to take from CSI all the great things about CSI – it’s also a new spin on it, and it’s sort of the zeitgeist of what’s happening right now, and I don’t think anyone’s really taken on the Internet and tackled it in a way that’s really what the audiences want to see, and I think if anybody could do that, it’s the CSI team.

AX: Can you talk about the differences between CSI: CYBER and the previous incarnations of CSI?

ARQUETTE: Well, this is much more cyber-related. I mean, there are currents where we don’t even know what the hell’s going on. We’re all on this Internet and have no clue what’s even going on. So I think there are a lot of things that will be revealed to people that they’ll be pretty shocked about.

AX: Is there a difference in how you approach playing a team leader like Avery Ryan and playing a family leader like Alison Dubois, the psychic wife and mom you played for seven years on MEDIUM? 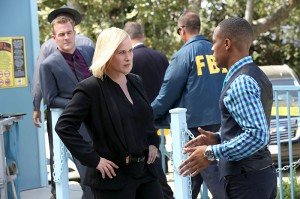 ARQUETTE: No. I’m an Aries, so it’s in my nature to be a leader and a boss. I want the best for everyone.

AX: Were you happy with the way MEDIUM wrapped up?

ARQUETTE: Well, it was kind of an intense ending. And yet I think it was a very emotional but beautiful ending. I mean, it was intense. The whole thing was so intense. You love everybody and you work with them every day – it’s strange to end anything after that long.

AX: Was CBS looking to do something with you after the end of MEDIUM on the network?

ARQUETTE: We’ve always been looking for the right project, but I was very excited when I read this. I feel like there will be so many stories that will be great.

AX: In real life, are you conversant with computers, or are they more mysterious to you than they are to your character?

ARQUETTE: They’re much more mysterious to me than they are to my character, but really, this is the kind of person really at the top of her game. It’s based on a real woman and she is a really remarkable woman.

AX: Is CSI: CYBER entirely episodic or is there an arc?

BRUCKHEIMER: Well, to be honest with you, it will be episodic with an arc. Both.

AX: What are you proudest of with the original CSI?

BRUCKHEIMER: That it’s still on, and we’ve got a great cast and great writing. Fantastic show.

AX: Is there anything you’d like to say about CSI or CSI: CYBER?

ARQUETTE: I just want to say, watch it.