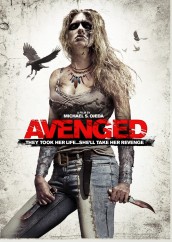 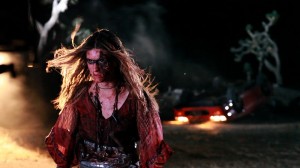 AVENGED is like a supernatural I SPIT ON YOUR GRAVE, if that film has a deaf woman that actually dies and begins to rot on her way to killing the men that did her wrong. Oh and if they added a contrived romance plotline that never really takes off during the course of the movie.

Zoe (Amanda Adrienne), a deaf girl with a boyfriend that lives far away, decides to go visit her boyfriend who lives far away. So instead of taking the direct route she decides to take a more rustic approach and quickly finds herself in the throes of a gang of hillbillies that get off on not only attacking the local Indian population but killing and raping any others that come in their path.

Poor Zoe gets taken by the bad guys and is similarly dispatched but before she goes all the way, a Native American Shaman performs some crazy ritual to heal her but instead summons the ghost of a former warrior that inhabits her body and sends her on a trail of blood and body parts for revenge. The thing that soon becomes clear is that Zoe is no longer alive. Her body is falling apart literally and bugs are already starting to gain traction in various open wounds.

Now, all that’s left is for her to take out everyone that did her wrong and hopefully quench the bloodlust of the spirit. Oh and there’s the whole romance that gets muddled when the boyfriend arrives and gets involved in the hillbillies that killed his love and he seems to go a little cray-cray toward the end as well.

At times, AVENGED is a brutal, gory revenge romp with body parts being used as weapons and blood flying everywhere but there are also times where the film becomes slapstick with strange moves being made by Zoe and others in regard to what is exactly happening. Still, there is worse fare out there in the realm of horror and if you are in need of a gory revenge horror flick this will do the trick.

AVENGED is in limited theaters and on VOD everywhere on March 6.