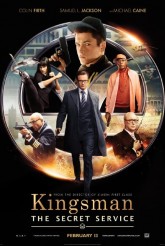 Bondian hijinks with ultra-violence and a shaky message

It’s hard to know how to quantify KINGSMAN: THE SECRET SERVICE. Based on THE SECRET SERVICE comic book series by Mark Millar and Dave Gibbons, the movie starts off as a James Bondian superspy adventure, with big action, big violence and upper-class English people who can use strong language with the best of them. This is all to the good.

Then the movie gets going in earnest, and we realize that director Matthew Vaughn and his co-screenwriter Jane Goldman mean for us to find a message in here somewhere. This is also generally a good thing – all films say something, so the filmmakers might as well be conscious about it – except that the message winds up very much at odds with the means in places.

The Secret Service in the title of KINGSMAN refers not to the agency that protects the U.S. president, but rather an extremely secretive organization with worldwide responsibilities, but consists only of upper-class white male Britons (though they do have an Irish administrator). When one of their men is killed in the field, each of the survivors nominates a candidate to take his place. Two candidates are female, which is not remarked upon. The candidate suggested by Harry Hart (Colin Firth), code name Galahad, is a working-class youth, which draws scowls from leader Arthur (Michael Caine).

Gary “Eggsy” Unwin (Taron Egerton) is the son of a former operative, but his mum has fallen on hard times and a jerk of a stepfather has made Eggsy angry and self-defeating. Harry feels responsible for the lad (his father was Harry’s best friend) and takes him under his wing; it turns out that Eggsy may have what it takes to be a Kingsman after all.

Eggsy and his peers would seem to be training in the nick of time. The world is being menaced by a plot by a seemingly benevolent techno zillionaire, Valentine (Samuel L. Jackson), who has some radical ideas about how to stop global warming. Can the Kingsmen discover and stop whatever it is that Valentine and his agile henchwoman Gazelle (Sofia Boutella) are trying to do?

This sort of plot is exactly the kind of thing James Bond and Jack Bauer square off against all the time, with the number brought to mind here much more 007 than 24. Vaughn stages action with the best of them, there are some good quips and the acting is fine across the board. So what’s the problem?

First, there’s a tonal issue. Depending on the type of movie, extreme violence can be appropriate – there’s at least one scene here that, come time to adapt Stephen King’s THE CELL, its makers will have a hard time doing a better job with the same concept. However, when most of the rest of the movie strikes a jovial mood, even tapping at the fourth wall on occasion, a jaunty montage of civilians (even noxious ones) being massacred, followed by something we’re meant to take seriously, feels more jarring than daring.

This leads to another issue. For all its joking around, KINGSMAN seems serious about its issues of non-snobbery on both the micro and macro scale. Given the condescension and lack of bodily respect the film accords some characters that are deemed comedic foils, it comes off as smug and even hypocritical rather than sincere.

Finally, there’s an issue involving candidate training. Without being spoilery, let’s just say that there was something similar in the GAME OF THRONES books that the television series opted not to include. When GAME OF THRONES wants to avoid something, it can be surmised that there may be good reasons for avoiding it. KINGSMAN goes there – and makes it worse by trying to walk it back, and then makes that worse by walking back the wrong part of it. By the time this is concluded, many people will be pulled far out of the narrative by genuine questions about who on the creative team was thinking what, and why, and how they came to make such an unnecessary mess over what could have easily been accomplished some other way.

KINGSMAN: THE SECRET SERVICE has some splendid parts. Still, when a movie keeps insisting, within its own dialogue, that it isn’t a certain type of movie and it essentially is that type of movie, it’s annoying. The shifts in attitude don’t make it some other sort of film. There’s no reason not to try something new with the genre, but here the attempts to change the game wind up being more disgruntling than satisfying.