Home » Into the Woods movie review 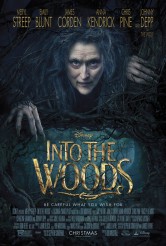 Movie Review: INTO THE WOODS 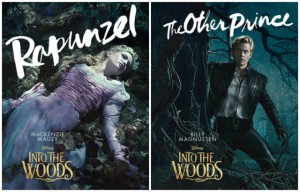 Not to name names, but transferring stage musicals to the screen can be risky business. This is especially true when there are magical elements in the original, because what looks splendid done live can look either cheesy (if copied from the stage) or jarringly over-real (if literalism takes over for what had been theatrical interpretation).

With INTO THE WOODS, the film adaptation of the Stephen Sondheim/James Lapine musical, director Rob Marshall strikes notes that are pretty right. With music and lyrics still by Sondheim and a screenplay book written by Lapine, this seems pretty faithful, save for a few judicious cuts, a toning-down of the Wolf (Johnny Depp) and a more definitive end for one major character. Marshall gives us a fairytale world that has its own misty glow and otherworldly life, neither too barren nor too filled with the regular grandeurs of nature, where it seems very normal for people to burst into song and cows to wear boots.

INTO THE WOODS, for those unfamiliar with the original, blends together a number of familiar fairy and folktales – the Baker (James Corden) and his Wife (Emily Blunt), Jack (Daniel Huttlestone) and the Beanstalk, Red Riding Hood (Lilla Crawford), Cinderella (Anna Kendrick) and Rapunzel (Mackenzie Mauzy) – and weaves them together into an intertwined yarn, bound together by a very determined Witch (Meryl Streep).

The themes, both musical and narrative, are ambitious. Just about all of the voices are up to Sondheim’s soaring challenges. For anyone who has forgotten, Streep reminds us that, yes, she also sings beautifully, while investing the frazzled Witch with both pettiness and heartbreaking sentiment. Blunt’s charm and common sense gather the film around the Baker’s Wife, so that she becomes a primary protagonist, and Corden is sweet and easy on the ears as her loyal, pragmatic husband. Crawford is a delightfully forceful Red Riding Hood – what goes on between her and the Wolf (Johnny Depp, not making the most of things) has been blurred a bit owing to the fact that Crawford, unlike the stage incarnations, really still is a child. Chris Pine and Billy Magnussen as the princes in search of their desired maidens make the “Agony” number as amusing as intended.

We also get what Sondheim and Lapine intend for us to find here – musings on parenthood, love, responsibility, blame and the way things have of never working out perfectly (or sometimes at all), despite the ways in which we’re constantly being told that if only we do X, we’ll get a happy ending. Their points are valid and affecting, presented like jewels within the framework of the songs.

INTO THE WOODS is very good, engaging as it runs and admirable afterwards, but it somehow misses being brilliant. Perhaps this is congruent with its message about the hidden cost of fairytales, which makes sense. It’s not that the film does many things wrong; it’s just that in the end, it doesn’t sweep us away, but rather sends us home simply nodding.