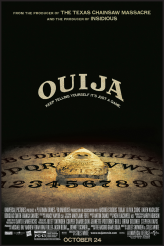 Maybe this isn’t what happened at all. However, OUIJA looks like the result of producers and/or the studio deciding that they wanted to bring out a PG-13 horror movie right around Halloween. Upon realizing/recalling that a lot of genre fans eye PG-13 horror warily – afraid that such films will have the flaws that afflict OUIJA – the production team opted to bypass the adult and even teen audiences and craft a movie intended to appeal to children and tweens who want to see what will feel to them like a scary story.

As the title suggests, OUIJA is about what happens when a ouija board – sold in stores, as this Hasbro tie-in points out in the dialogue – turns out to be more than a plaything. After her best friend Debbie (Shelley Henning) apparently commits suicide, high school student Laine (Olivia Cooke) is heartbroken. When she’s given Debbie’s old effects, she finds the ouija board they used to play with as kids. Laine enlists her social circle (Daren Kagasoff, Bianca Santos, Douglas Smith) and her slightly younger sister (Ana Coto) to try to communicate with Debbie via the ouija board in order to find out what really occurred. To be spoilery but vague, bad things happen.

It’s not that OUIJA, directed by Stiles White and written by Juliet Snowden & White, doesn’t have actual scares. It does, though a fair number of them are based simply on loud noises and sudden entrances. The problems, however, are many. The more we find out about what’s happening, the less it makes sense. The rules of what the supernatural force can and cannot do are never defined in a meaningful way; it’s able to wreak so much mischief from the outset that we don’t see what difference will be made by what could have been a great story twist. Debbie’s actions at the beginning of the film become inexplicable, as we come to see that no one else who uses the board has a similar issue. Much is made of the fact that ouija sessions are supposed to end with “goodbye,” yet no one does this and it never seems to cause any trouble that’s not happening already. Then there’s a sudden spurt of exposition from a source who has no reason for not speaking up sooner or being more helpful afterwards.

These aren’t the only issues. The mostly twenty-something leads don’t look like they belong in high school, so there’s already a suspension of disbelief matter before we even get to what the ouija board can and can’t do. The dialogue tends to be obvious, and characters have a tendency to abruptly freak out, to the point where it’s amusing. This said, Cooke gives a strong, emotional performance and Lin Shaye is outstanding as an elderly woman who provides some integral information.

On the plus side, OUIJA is a surprisingly beautiful film; director White, who has a background in special effects, finds ways to get the most visually out of all of his environs and events.

There are some great ideas in OUIJA, but the plot construction mires them in confusion, draining them of impact. OUIJA works on the level of something that delivers basic jolts on a regular basis, but it lacks the internal logic to develop momentum or suspense.