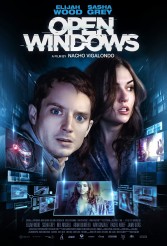 A twisty thriller that sometimes seems to outsmart itself

OPEN WINDOWS declares its intentions right from the start, when we appear to be watching an especially cheesy horror movie starring scream queen Jill Goddard (Sasha Grey). Then it turns out we’re watching a trailer, being watched at a convention, which is in turn being streamed live on the computer of Nick Chambers (Elijah Wood). We can’t say we weren’t stylistically warned that the film is going to play more than a few tricks on its characters and on us. Even the title plays with its meaning, referring to both the openings in the sides of buildings and the elements on a computer screen.

Nick is the webmaster for one of Jill’s websites, and he’s won dinner and an interview with his favorite actress. He’s traveled from Los Angeles to Dallas for the meeting. He is understandably crushed to receive a phone call from the English-accented Chord (Neil Maskell) that the contest has been canceled. However, while Nick is still watching Jill’s live panel, Chord demonstrates that he has control of the cameras in the ballroom where the Q&A session is being held. Nick is treated to an overhead shot of Jill that emphasizes her breasts. Then Chord invites Nick to spy on Jill in her hotel room. Nick already has the camera equipment he’s brought for his now-nonexistent interview and there’s a camera feed into his computer. To his credit, Nick starts questioning the situation, but by then it’s too late.

For a little while, fans who watched Wood on WILFRED may feel as if they’ve stumbled into a kind of sequel, where the actor is playing another character who starts to do strange things when urged by someone no one else hears, and doesn’t ask questions until he’s stuck. Then plot complications begin piling up, and we’re not sure what’s real and what’s fake until we think we know where all of this is going – and most of us will be wrong.

Director/writer Nacho Vigalondo has crafted a clever storyline that keeps us engaged throughout. Wood invites empathy, and the script and direction are careful to keep his Nick mostly on the right side of the smitten fan/creepy stalker divide; we see the sweetly nerdy video he makes for the contest, and he wants out when he should want out, though he does succumb to looking into the open window.

However, Vigalondo seems to want to send a message about those who would abuse technology to violate privacy, and this doesn’t quite work, partly because it’s unclear what’s happened to Jill before the film starts and partly because the spying technology is sometimes being used for altruistic purposes here.

Then there’s the matter of all those twists. By the end of the film, we’re not sure that the clues add up properly, or if we’ve just been whisked past a few things that don’t stand up to scrutiny. To ascertain this would require a second viewing, and while OPEN WINDOWS takes us on an intriguing journey, there aren’t standout moments that we’re keen to revisit. It’s a smart puzzle, but not one with as much interior life as it could have.