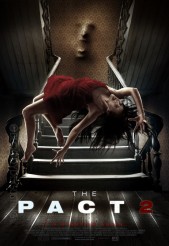 The good and bad news about THE PACT 2 is that it’s a horror sequel that stands perfectly well on its own; there’s no need to have seen the original PACT. The good news is that newcomers will feel up to speed; the bad news is that this means the plot is relatively sparse.

June Abbott (Camille Luddington) is a crime scene cleaner in Los Angeles, living with her policeman boyfriend (Scott Michael Forster) in a charming Craftsman house. June has problems with her recovering alcoholic mother, but this is nothing compared to what happens when she’s drawn into the Judas Killer case. The Judas Killer (Mark Steger) was killed by Annie (Caity Lotz), but now there seems to be a copycat at work, and June is having some very strange visions.

Writers/directors Dallas Richard Hallam & Patrick Horvath do a good job with some jump scares and manage to have their extreme gore without doing the torture scenes that customarily accompany this (that’s where the crime scene cleaner heroine comes in handy). June has an interesting attitude toward her work that makes us want to know her a little better than the script allows; we get hints that this could have been a more engrossing experience if the filmmakers had trusted their sense of character a little more. There is also an engaging performance by Patrick Fischler as a non-stereotypical FBI agent looking into the situation.

There’s a great sense of atmosphere, with the Los Angeles environs used to strong effect. There’s also a suitably pervasive sense of dread and foreboding. We generally come to understand what’s going on with June, although it’s not spelled out explicitly. However, the title remains a mystery: what pact and what’s it got to do with what’s happening here? Also, without becoming spoilery, the investigative side of the story doesn’t always support itself.

Still, THE PACT 2 works well enough – it had mood, scares, blood and better than average casting in a couple of lead roles, which makes it sufficient for viewers in search of a decent horror movie.