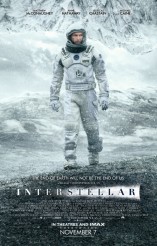 The term “hard science fiction” means that the subject matter involves actual science, rather than the type of science fiction like, say, STARGATE, where the science only exists to get characters from here to there. INTERSTELLAR is a melding of hard science fiction, interpersonal drama, big action sequences and big ideas. The screenplay by Jonathan Nolan and director Christopher Nolan goes for epic scope, with the fate of both humanity and the father/daughter bond of Cooper (Matthew McConaughey) and his child Murphy, called “Murph” (Mackenzie Foy as a little girl).

In an early sequence, we see Cooper piloting an ill-fated spacecraft. He becomes a farmer, working with his father-in-law (John Lithgow) and son Tom (Timothee Chalamet) at a time when the Earth is experiencing massive crop failure and gigantic dust storms (viewers who’ve seen both will be reminded of Ken Burns’ documentary THE DUST BOWL, about the real-life crisis in the U.S. Midwest during the 1930s). It turns out that the planet isn’t going to be able to sustain human life for much longer than the current generation.

As everyone knows, there are no habitable planets in our solar system. Fortunately, in INTERSTELLAR, a means has been found within the solar system to travel to another galaxy. Cooper, as an experienced former NASA pilot, is tapped to fly the mission, which is to see if any of several possible planets can actually sustain human life.

INTERSTELLAR immediately gets points for not only asking but emotionally centering itself around the question that many similar science-fiction stories about humanity’s potential relocation: what about the people alive now? Cooper is desperate to save not just the abstract future species, but those alive in the present, particularly Murph. The obstacles are so formidable that we can’t imagine how this can happen – this is a film where we really don’t guess what will come next, at least until we hit the concluding portions. This is another plus.

McConaughey gives a deeply felt performance as the friendly, humane Cooper; this is certainly the warmest film made by Nolan. He is ably supported by a strong cast that includes Anne Hathaway, Jessica Chastain, Michael Caine and Matt Damon, plus terrific voice work from Bill Irwin and Josh Stewart as two robots who are thrillingly original in conception and construction.

However, sometimes the filmmakers’ desire to make sure they’re including everything causes the film to lag. We understand that Cooper is a superior pilot; the film might have benefited from allowing us to assume he’s performed a few of the tricky bits of flying without showing us quite so many. There’s a sort of mini-movie detour at one juncture where INTERSTELLAR morphs into a thriller for awhile, while simultaneously making major observations about loneliness, human nature and automatic assumptions (good hat trick!). Then it morphs back and, while its finale is worthy and set up properly, we start feeling that we’ve been here a good while. There is also some on-the-nose dialogue that crops up at poor moments.

At the same time, there are also some strange omissions. To explain them in detail would reveal too much about the ending, but given the movie’s set-up, there are a few things that it seems like we ought to know and/or be shown by then.

Even so, INTERSTELLAR is impressive. It is superbly made, and combines compelling thought about everything from ecology to the nature of time to a child’s belief in ghosts into something cohesive and mostly engrossing. At the risk of cinematic heresy, in many ways, this is a more accessible 2001 for the current century.