Home » How To Get Away With Murder Exclusive Interview Betsy Beers 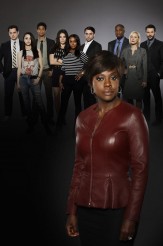 ©2014 ABC/Craig Sjodin
Viola Davis as Professor Annalise Keating, Billy Brown as Nate, Alfred Enoch as Wes, Jack Falahee as Conner, Katie Findlay as Rebecca, Aja Naomi King as Michaela, Matt McGorry as Asher, Karla Souza as Laurel, Charlie Weber as Frank and Liza Weil as Bonnie in HOW TO GET AWAY WITH MURDER - Season 1
Interviews 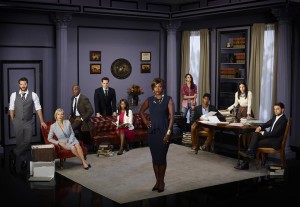 Shonda Rhimes effectively owns Thursdays on ABC. She’s the executive producer on all three of the network’s hour-long dramas that night – GREY’S ANATOMY at 8 PM, SCANDAL at 9 PM and freshman hit HOW TO GET AWAY WITH MURDER at 10 PM. Rhimes created the first two; MURDER was created by Peter Nowalk, who previously served as a writer/producer on GREY’S and SCANDAL.

Betsy Beers is Rhimes’ partner in the ShondaLand production company and an executive producer on all three shows. She’s present at ABC’s HOW TO GET AWAY WITH MURDER for the Television Critics Association. The series stars Viola Davis as a university law professor who, along with her students, becomes enmeshed in a crime at the same time that they’re defending clients in court. Beers takes some time to talk about MURDER and working with Rhimes in general.

ASSIGNMENT X: Filling all of ABC’s Thursday primetime schedule now, do you and Shonda Rhimes feel like “Moo-ha-ha-ha, our plan for world domination is working,” or “Oh, boy, how do we keep all these spinning plates in the air?

BETSY BEERS: I love the moo-ha-ha. I’m going to say “moo-ha-ha” now. I think the great thing for us is that actually, we’re used to doing three shows. We have been doing three shows for awhile. I like personally being busy. I find that also the shows are at different stages and they all need different kinds of energy and different kinds of focus. So we’re used to juggling the workload, and I think for me, certainly, it’s fun. I love the idea of the new challenge and I love this new show, so having the opportunity to work on it I think is going to be a blast.

AX: Is there a difference – because the other two shows were created by Shonda Rhimes and MURDER is not, even though it’s somebody from ShondaLand – in how you approach creative discussions, because the show runner here is not also the head of the company?

BEERS: Well, I started with Shonda on GREY’S ANATOMY. So we developed GREY’S ANATOMY together, so it was before either of us had ever done television. We also did this with OFF THE MAP with Jenna Bans, who created the show and it was her first television show on the air. So I think my job is the same, which is, I’m here to do whatever is necessary to help support, to continue to push forward what is best for the show runner, the creator and the show. And I feel like I actually serve a very, very similar purpose with Pete as I have with Shonda’s shows and I did with Jenna Bans.

AX: Your husband is a lawyer. You’ve said he helps as a consultant on MURDER …

BEERS: Bruce Cormichael. He’s a criminal defense attorney. Living with a criminal defense attorney – what’s amazing is, he’s got a lot of stories from the past, he’s got a lot of really interesting tales, and I think what’s been great is, for Pete, he’s been able to share a lot of that historical kind of trial stuff. But he started as a public defender; he went on to a private practice and he’s had pretty much a full range of experience in law. So it’s a great perspective for somebody who does what I do for a living to come home and be complaining about your day and gee whiz, I got a couple of difficult phone calls. And he is talking about a death penalty case, and all of a sudden, I feel really like I should not be complaining at all about whatever I was complaining about, but he’s a lovely guy, he’s very interesting. And he puts up with me. So right there, that’s something. I do bring him places, because he’s very entertaining.

AX: Your husband is advising you on MURDER, and Judy Smith, the consultant that Olivia Pope is somewhat based on in SCANDAL …

BEERS: Judy Smith is a co-executive producer and she continues to consult on that show.

AX: Is information from one of them applicable to the other show, because they both have stories that involve legal issues?

BEERS: You know, they both tend to deal with different things. I think legally [MURDER], because it’s got a lawyer, because it’s about a criminal defense attorney, I think the amount of actual legal consultation is more intense. I think there is a certain amount of legal on SCANDAL, but it’s of a different nature. Because it’s a show about a criminal defense attorney, there is more of a focus on that on this show [MURDER]. [Cormichael] has been available, and because he has a large range of people that he knows who also can answer questions, we have kind of a legal world available to us, which is terrific.

AX: Was that any of the reason that you and Shonda Rhimes decided to take this project on?

BEERS: No. [Nowalk] came to us with this idea. He told us what the basic idea was, and what he was thinking, and that’s what made us fall in love with it. We really think that Pete is an incredibly talented writer. We’d developed a pilot with him once before in the past. He’s incredibly good at creating story, he’s very good at generating story and the idea, the concept of this, struck us as being so incredibly compelling and delicious and fun that that was the primary reason that we wanted to pursue it. It’s so much fun.

AX: Is there anything you’d like to say about HOW TO GET AWAY WITH MURDER right now?

BEERS: I love the show, I think it’s going to be so much fun to watch. I think the characters are complicated, it’s a world that we haven’t really seen – the law student world is something that I don’t think has been covered that fully on television recently and I just think it’s going to be an incredibly complex, entertaining, delicious mosaic for people to enjoy.

Article Source:Assignment X
Article: Exclusive Interview: HOW TO GET AWAY WITH MURDER executive producer Betsy Beers