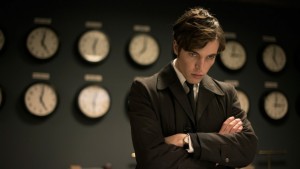 In BBC America’s new miniseries THE GAME, premiering Wednesday, Nov. 5 at 10 PM, it’s the early 1970s. England and the Soviet Union are spying on one another and it’s not clear to us, or perhaps even to him, where the loyalties of MI-6 agent Joe Lambe (Tom Hughes) truly are. Joe’s love has been murdered by the KGB, so he has vengeance on his mind, while some strange office politics play out at headquarters, where Daddy (Brian Cox) rules the department. Then there’s the possibility of nuclear war, due to a particular secret that the KGB is keen to unearth.

THE GAME was created by Toby Whithouse, a British writer/producer who previously created the supernatural roommates series BEING HUMAN and the hospital drama NO ANGELS, as well as being a writer for DOCTOR WHO. He’s at a party thrown by BBC America for the Television Critics Association, where he expresses some astonishment at what he’s seeing – yes, that really is a woman clad as a mermaid, complete with tail, in the swimming pool, and another woman is holding a tree.

Against this surreal backdrop, Whithouse talks about his gritty period espionage drama.

ASSIGNMENT X: Did the BBC or BBC America come to you and say, “How about doing an espionage project,” or was this something you wanted to do on your own?

TOBY WHITHOUSE: No, I had a meeting with Ben Stevenson, the head of drama at the BBC, and he was asking me what I wanted to do for my next project, and I’d been playing around with this idea – not necessarily the idea for the show, but I’d been thinking a lot about the Cold War and about the 1970s, and gradually, an idea was spawned. So we went from there.

AX: Is this your first major non-genre piece?

WHITHOUSE: Certainly, for a long period of time. I wrote a medical show called NO ANGELS, back in the early 2000s. But this is the first thing I’ve done [since then] that hasn’t had either a monster or a robot or an alien in it somewhere. I think it was time for a change, it was time to move on and do something else. Sci-fi and horror I would say are kind of my first loves in terms of genres, so I’m certain I’ll go back at some time, but yeah, I just fancied a bit of a step change.

AX: As far as constructing THE GAME, what was the first thing you thought you’d like to do and what got layered onto it?

AX: What did you learn in your research that added to the story?

AX: The Letter of Last Resort is historically real and becomes a major plot point. Was that something you knew about when you started?

WHITHOUSE: Yeah, I think Edward Heath was the first one to do it.

AX: Were there any big scandals in the early Seventies that you’re borrowing from, since your main characters are fictional?

WHITHOUSE: No, not that I recall. Again, sometimes these things inform your work in quite subtle ways. And I did a lot of research for the politics of the time, because that was all, regardless of what direction, what my interpretation of the espionage was, all of that stuff had to be absolutely on the money.

AX: Is there anything else you’d like to say about THE GAME right now?

WHITHOUSE: I just hope everyone really enjoys it.